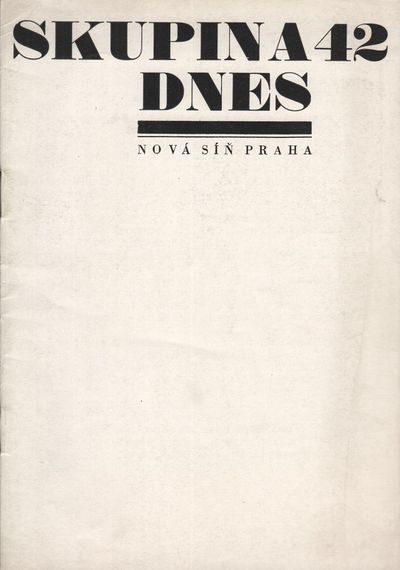 Prague: SČSVU, 1970. Octavo (20.8 × 14.5 cm). Staple-stitched printed wrappers; [16] pp. Eight reproductions. Very good. Catalog of an exhibition organized by the Nová síň in Prague in Spring 1970. With an introduction by Eva Petrová, including biographical information, and a resume in French. The Czech post-war artist collective "Skupina 42" (Group 42) was formally founded in 1940, during the German Protectorate. The group was forbidden by the Communist government in 1948, but its members and artists continued to work and impact the Czech art scene well into the 1970s. "Skupina 42" was significantly shaped by the experience of war and the German occupation. It combined pre-war tendencies such as cubism, futurism, and constructivism with existentialist and surrealist thought and images. Nevertheless it also sought to counteract a certain academic quality in art and was drawn to a kind of urban realism: the city in its manifold forms was an important theme, and ties to American literature and art were also strong. Not in KVK, OCLC. (Inventory #: P6497)
$75.00 add to cart or Buy Direct from
Bernett Penka Rare Books
Share this item