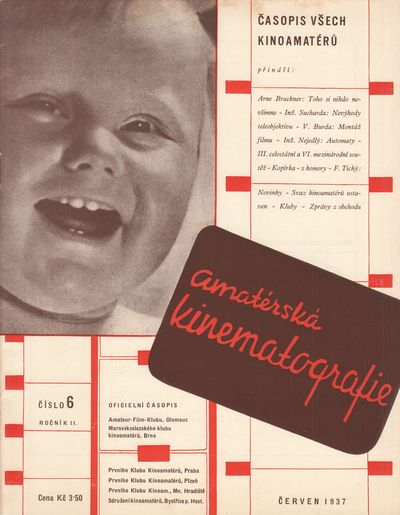 Prague. Fr. Tichý, February-December, 1937. Quartos (26.8 × 21.4 cm). Original staple-stitched photo-illustrated wrappers; ca. 24 pp. per issue (consecutive pagination totaling 252 pp. Illustrated from photographs throughout. About very good; occasional light discoloration or foxing. Nearly complete second year run of this monthly journal for amateur cinematographers, published from 1936 through 1942 (nos. 1 and 11 are lacking). With articles on sound film, new film technology, the activity of Czech amateur cinematographers, color film, analyses of visual effects used in various films, film montage, and many other topics. A section at the back gives overviews of the activities of various Czech film clubs, including those in the province. With numerous ads for new film and photography technology. With attractively designed wrappers (unattributed). As of April 2020, KVK and OCLC only show one holding outside the Czech Republic. (Inventory #: 50694)
$250.00 add to cart or Buy Direct from
Bernett Penka Rare Books
Share this item

Two satirical anti-Bolshevik comics published at the height of the Polish-Bolshevik War (1919-1921). Likely by Kamil Mackiewicz


(click for more details about Two satirical anti-Bolshevik comics published at the height of the Polish-Bolshevik War (1919-1921). Likely by Kamil Mackiewicz)
View all from this seller>