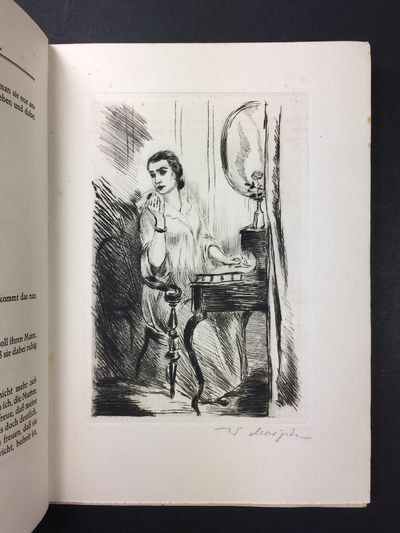 by Tolstoi, Lev; Vasilii N. Masiutin, illustrator
Berlin: Franz Schneider Verlag, [1924]. Small quarto (26.5 Ã— 18.5 cm). Original gilt-ruled half calf; marbled paper-covered boards; top edge gilt; 123, [1] pp. Printed on thick wove paper, with six full-page original etchings and three vignettes, the former signed in pencil by the artist. With Masjutin's additional signature on the colophon. Bookplate of the distinguished collector, Martin Winkler. Boards and extremities lightly rubbed; some foxing to gutter of front and final free end paper. Limited bibliophile edition of Tolstoy's 1900 play "The Living Corpse," with six large signed etchings by Vasilii N. Masiutin (1884-1955, also Masjutin). Masiutin's work blended symbolism, the grotesque, and even surrealism, and he was occasionally referred to as the Russian Goya in his earlier phase. He was active in a range of media, including lithograph and woodcut, as well as producing original drawings and paintings. After 1921, he emigrated and settled in Berlin, where he collaborated with numerous Russian emigre publishers, such as "Neva" and "Gelikon," as well as illustrating many German translations of Russian classics. This is copy 197 of 200 copies published, with Masiutin's signature beneath the colophon. No additional editions were issued and the illustrations were evidently never reprinted. From the private collection of noted German scholar and icon collector Martin E. Winkler (1893-1982). Outside Germany, KVK and OCLC only locate a single copy, at Occidental College Library (Los Angeles). (Inventory #: P4558)
$500.00 add to cart or Buy Direct from
Bernett Penka Rare Books
Share this item