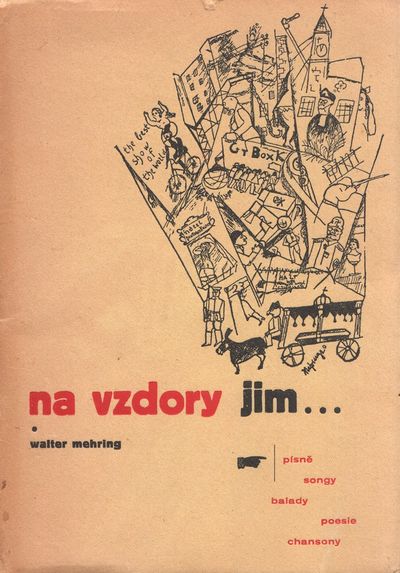 by Mehring, Walter and Jiří Taufer, translator
Olomouc: Index, 1938. Octavo (21.2 × 14.7 cm). Publisher's pictorial wrappers; 105, [4] pp. Wrappers very lightly worn; upper spine nicked; else very good. First Czech translation of Mehring's first publication in exile, which appeared in Paris in 1934, and contains poems from his books burned by the Nazis, as well as some recent texts. Mehring (1896-1981) was a Jewish German writer and noted satirist of Weimar Germany, who was barely able to escape abroad after Hitler's rise to power. Designed throughout by Zdeněk Rossmann, for the left-leaning Index publishing house in Olomouc, which also issued the eponymous modern art and architecture journal throughout the 1930s. The book also incorporates Mehring's own drawings, With Rossmann's distinctly understated typographic design. The translator, Jiří Taufer (1911-1986), was a noted Czech communist poet and translator, and later an official of the communist regime. The book includes his poem to Taufer, including a German translation by Walter Hart ("Brief an Walter Mehring"). Also included is a postscript by Bedřich Václavek. Outside the Czech Republic, KVK and OCLC only show the copies at SLUB Dresden, Akademie der Künste, Deutsche Nationalbibliothek, Getty, Smithsonian, and Yale. (Inventory #: P6016)
$400.00 add to cart or Buy Direct from
Bernett Penka Rare Books
Share this item