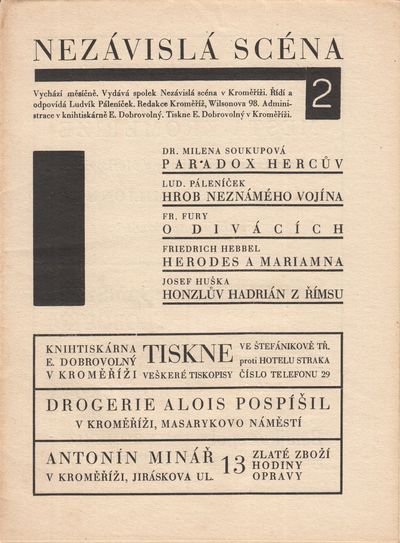 by Páleníček, Ludvík, editor
Kroměříž: Nezávislá scéna v Kroměříži, [1931-1932]. Small octavos (19.2 × 14 cm). Original typographically illustrated self-wrappers (single folded leaves); 128, [1] pp. (continuous pagination). Very good or better, uncut and unopened issues. Complete first year run (of two volumes published) of this independent Czech theatre journal from Kroměříž, allied with the theatre collective of the same name. Czech theatre had been of great significance to national self-awareness and political goals since the nineteenth century, but it experienced tremendous growth during the interwar period, with such famous figures as Jiří Voskovec and Jan Werich and their "Liberated Theatre." By 1967, the critic Kenneth Tynan famously proclaimed Prague "the theatre capital of Europe." The provinces, too, saw much activity, as documented by this journal, edited by Ludvík Páleníček, at times assisted by E. F. Burian. In his lead article, the editor proclaims that theatre must be independent of society, given the task of introducing the public to new, serious theatre, at times using "radical" devices. With contributions by Josef Hruška, Otton Župančič, Milena Soukupová, Pavel Fraenkel and others, translations of work by Friedrich Hebbel, Franz Werfel, Rudolf Borchardt, Romain Rolland, Edgar Allan Poe, W. B. Yeats, Rainer Maria Rilke, and Eugene O'Neill. With articles on theatre in Brno and Moscow, on viewers and actors, as well as shorter glosses. The journals were evidently published to coincide with the theatre seasons of 1931 and 1932; some issues feature loosely inserted supplements, such as announcements of premieres and actor portraits. An inserted table of contents is also provided. Attractively designed with understated typography, and numerous charming ads for businesses, including architects, photographers, but also cafes and cabarets, in provincial Kroměříž. Not in KVK, OCLC. The copies at the Czech National Library are marked as deaccessioned; we only locate the complete run at the Prague Theatre Institute (Divadelní ústav). (Inventory #: P6057)
$350.00 add to cart or Buy Direct from
Bernett Penka Rare Books
Share this item