Litíce: povídky o vojně [The Furies: stories about the war]. Signed and inscribed by the author 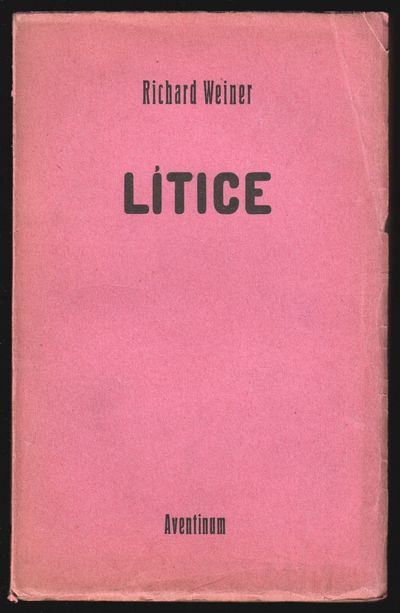 by Weiner, Richard
Prague: Aventinum, 1928. Octavo (19.3 × 12.3 cm). Original printed wrappers; 159, [5] pp. Signed and inscribed by Weiner on the half title. Wrappers very lightly sun-toned and creased; still a highly attractive copy, very good or better. Second edition of Weiner's first book of prose, considered to be the first work of Czech literature inspired by modern warfare and the horrors of World War I. Weiner (1884-1937) was a Czech Jew who began his journalistic and literary career after moving to Paris in 1912, but happened to witness the outbreak of the War while in Prague. A recent article notes that Weiner had "intimate knowledge of shell-shock in its most literal form: he saw active service in Bosnia in 1912 and in Serbia in 1914. Indeed, his second tour of duty ended in a nervous breakdown, and in early 1915 he returned to Prague" (Peter Zusi, "States of Shock: Kafka and Richard Weiner," 135). Weiner published both poetry and prose throughout the 1910-20s, in a stylistically complex, psychologically probing, and fundamentally abstract style that has invited comparisons to Franz Kafka since at least the 1930s. While his early work is marked by expressionism, Weiner became influenced by surrealism in the late 1920s, after once again settling in Paris. Evidently some passages of Litice were too risque for the censor, who cut entire paragraphs, and the 1916 first edition was printed with visual omissions; this second edition first presented the complete text. Weiner is still little known outside the Czech Republic, although recent years have seen more attention, following the translation of his "The Game for Real" into English. Scarce, especially signed. KVK, OCLC show copies at Staatsbibliothek zu Berlin, British Library, Indiana, UCL, Zurich, and Ljubljana. (Inventory #: P5011)
$650.00 add to cart or Buy Direct from
Bernett Penka Rare Books
Share this item


(click for more details about Doświadczenie polskie [The Polish Experience])