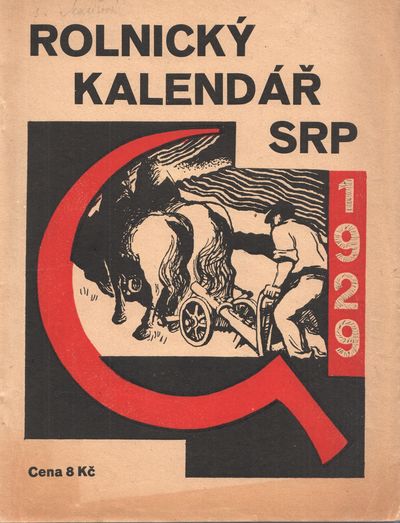 by Uřidil, Josef, editor
Prague-Karlín: Karel Borecký, [1928]. Large octavo (25 × 18.5 cm). Original pictorial wrappers; 103, [9], 16 pp. Numerous full-page illustrations and smaller photo-montages. A few marks to front wrapper; else very good. Rare socialist anthology of art and literature (both original texts and works in translation), issued by Czech communists. The editor is not stated. The calendar section features small photographs showing the Red Army, communist demonstrations in the Czech Republic, Germany, and Russia. With poetry and prose by Filip Dobrovolný, Josef Hora, Vladimír Šacha, Egon Erwin Kisch, Helena Malířová, Maksim Gorky, a longer photo-illustrated article on the ten-year anniversary of the Red Army, Henri Barbusse, Vera Inber, many caricatures by Franta Bidlo, Lev Nikulin. Also featured are numerous full-page photo-reports showing Soviet works in the countryside, the development of technology, and other illustrations, which appear to have been reproduced from the photo-illustrated journal "Reflektor." A highly interesting, visually striking record of communist publishing in interwar Czechoslovakia. Curiously, another issue with the exact same content was issued with a different title and wrappers, as "Komunistický kalendář na rok..." Outside the Czech National Library, KVK and OCLC show no records of this periodical. The Czech National Library does not appear to hold the present issue, only those for 1928. (Inventory #: P6477)
$250.00 add to cart or Buy Direct from
Bernett Penka Rare Books
Share this item