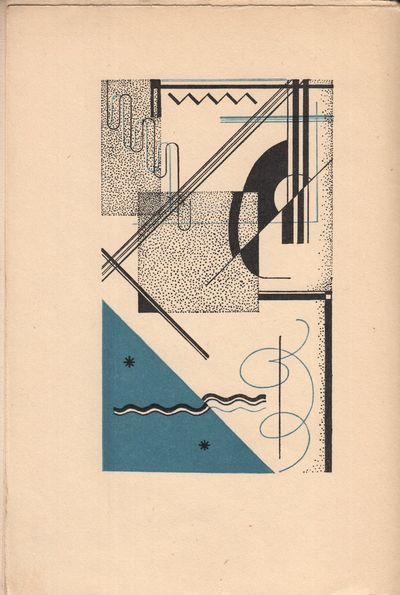 by Nezval, Vít&#283;zslav
Prague: Plejada, 1927. Octavo (20.3 × 13.5 cm). Original pictorial wrappers by Vít Obrtel; 44, [2] pp. Signed by Nezval to half title. Wrappers lightly dust-soiled; small ink stain to rear wrapper; still about very good. First edition of this volume of poems, considered a turning point in Nezval's work. "Akrobat" belongs to the second phase of the Poetism movement and represents a certain crisis for Nezval in which earlier Poetist optimism is replaced by the poet's scepticism. Hints of Nezval's future surrealist direction are already apparent here. Nezval (1900-1958) was perhaps the most significant twentieth-century Czech poet. He was the leading light of Czech poetism and, later, surrealism, as well as an early member of the avant-garde group Devětsil. Nezval was famous both for his energy as an organizer of the Czech avant-garde and for his prolific output of highly lyrical and associative verse. With a constructivist cover and frontispiece by the Devětsil architect Vít Obrtel. This copy is part of the regular print run; additionally, 200 copies were issued on Japan Banzai and 50 copies on Van Gelder. Vloemans 98. (Inventory #: P6058)
$275.00 add to cart or Buy Direct from
Bernett Penka Rare Books
Share this item