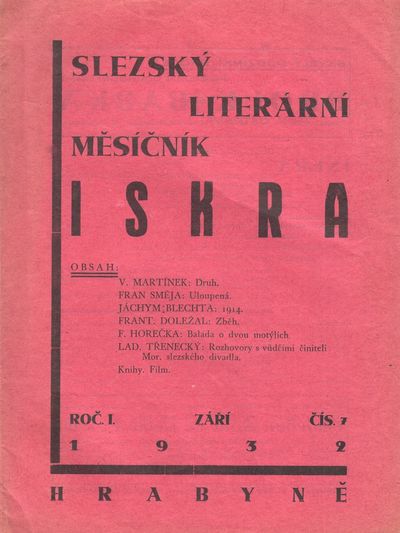 Hrabyně: Iskra, 1932. Octavos (25 × 19 cm). Original typographically illustrated wrappers on differently colored paper; 151 pp. (continuous pagination). Very good or better copies. All published (ten issues) of this Silesian literary review, published in Hrabyně, near Ostrava. In prose and poetry, as well as countless reviews, book discussions, and articles on theatre and film, the young authors demonstrate their desire to tap into international modernist trends, despite their provincial setting; at the same time, they also incorporate themes of regional significance and allow a measure of local patriotism. Their urban orientation is also reflected in the rather appealing typographic design throughout; the wrappers feature folded flaps, and contain numerous ads; the texts within are set using different typefaces. With contributions by Vojtěch Martínek, Ladislav Třenecký, Zdeněk Bár, Jáchym Blechta, Fran Směja, Emil Dvořák, Milan Rusínský, Marie Glabazňová, Josef Kalus, Jan Schwarz, and others. Several texts focus on Moravian and Silesian theatre and literature. A number of issues feature additional ephemera, such as order envelopes and announcements by the editors. KVK, OCLC show copies at Universitätsbibliothek Bamberg and Indiana. Not held by the Czech National Library. (Inventory #: P6105)
$450.00 add to cart or Buy Direct from
Bernett Penka Rare Books
Share this item