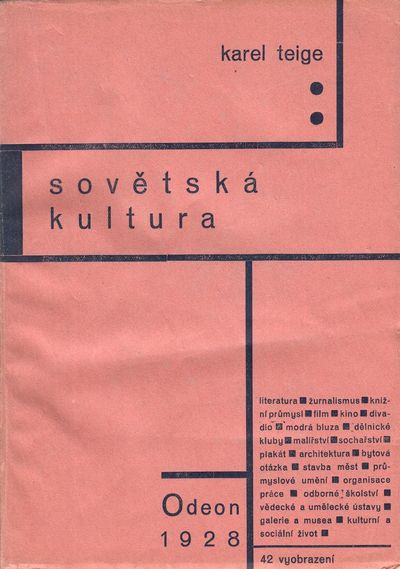 by Teige, Karel
Prague: Odeon, 1927. Octavo (19.5 × 14 cm. Publisher's typographic wrappers, designed by Karel Teige; 123 pp. with 43 reproductions on 32 leaves of plates, on better stock. Signed by Teige to half title. Very good. First and only edition of Teige's reflections on his trip to the Soviet Union in 1925, in which he analyzes publishing and book design, the visual arts, contemporary architecture, theatre, Soviet everyday culture and government. With Teige's minimalist typographic design and the striking two-color title page. One of the first non-Russian publications comprehensively examining Soviet Constructivism, Teige's work contains the following five chapters: I. The book and printing in Soviet Russia, II. Cinema in the USSR, III. Art of Soviet Russia, IV. Modern Soviet Architecture, V. Soviet Culture of the Second Decade. Up until 1926, the Czech avant-garde had been largely divided, with Devětsil and Poetism's loyalties towards Paris, whereas S. K. Neumann and the Moravian "Literary Group" were more interested in Moscow. In this work, Teige forms his argument for the Czech avant-garde to shift towards greater focus on a Soviet and Constructivist-influenced aesthetics. With 32 photographic plates, reflecting all areas of Russian Constructivism: works by Rodchenko, Malevich, Lissitzky, Tatlin, poster designs by Lebedev, stills from films by Eisenstein; Kandinsky, Altman, Puni, Sterenberg, and others.