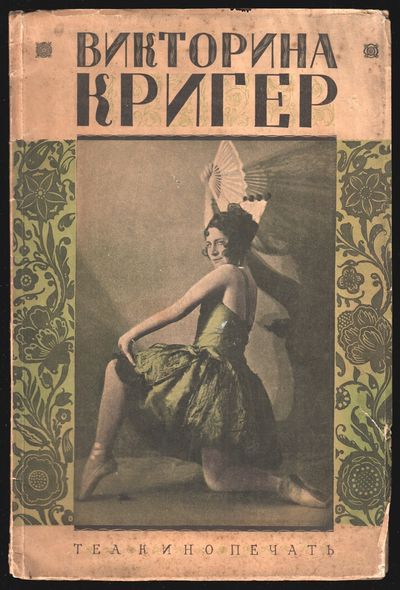 by Iving, Viktor Petrovich
Moscow: Teakinopechat', 1928. Octavo (26 Ã— 17.5 cm). Original photographic wrappers; 30, [2] pp. Illustrated wrappers by V. A. Filippov. Numerous photographic illustrations throughout the text. Wrappers lightly worn and creased; internally very good. First edition of this monograph on Viktorina Kriger (1893-1978), the famous Russian ballet dancer, who performed in numerous countries, such as the USA, Canada, Italy, Germany, and Switzerland. Kriger was born into an artistic family and graduated from the Imperial Theatre School in Moscow. By 1910 she was dancing in the Bolshoi Theatre, where she remained, with interruptions, until 1948. She was reputed to be one of Maksim Gorky's famous ballerinas. She was often compared to Anna Pavlova, and some called her the Second Pavlova (indeed, she was considered a rival to Pavlova, which ended her brief association with Pavlova's company in 1921). The most remarkable features of her technique were expressive rhythm and energy--'zhizn', or 'life' in Russian. She conquered the ballet audience worldwide, as well as charming ballet experts and critics. American newspapers such as "New York Call" (1921) and the "Evening Mail" (1921) described Kriger as a "dynamic little lady" with enthusiasm and as a sensation in the history of the performing arts. Iving's work traces Kriger's artistic career, the essence of the technique, and her joyous art of living and dancing. With numerous vivid and appealing photographic prints that document the life of this appealing performing artist. KVK and OCLC show copies at Bayerische Staatsbibliothek, Staatsbibliothek zu Berlin, NYPL and the British Library. (Inventory #: P5266)
$350.00 add to cart or Buy Direct from
Bernett Penka Rare Books
Share this item