The innocents at home. By Mark Twain. Copyright edition 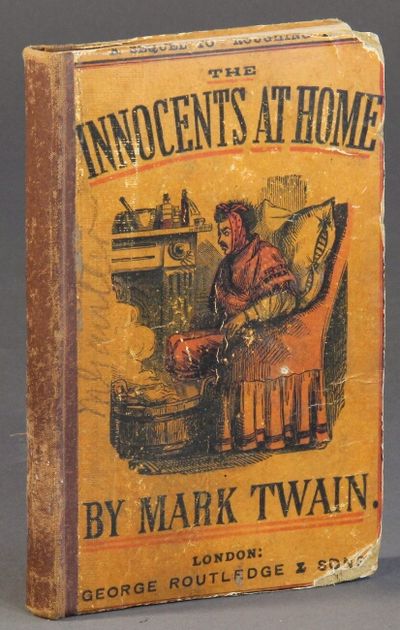 by Clemens, Samuel
London: George Routledge and Sons, The Broadway, Ludgate, n.d., 1872. First English edition, first printing, of the final part of Mark Twain's Roughing It (precedes the American edition); also reprints his Burlesque Autobiography, small 8vo, pp. vi, [1], 8-224, [2] ads; cloth-backed pictorial boards, extremities rubbed and some scuffing; old library bookplate on front pastedown, but no other markings; spine and endpapers replaced at an early date and possibly lacking a leaf of ads; good and sound. Perhaps a variant of BAL 3336. On the back cover 9 titles are listed, not 5 as in the first state, and not 11, as in the second state. To clear this up I asked Kevin MacDonnell. He says this: "BAL made a hash of the yellow-backs. Copies of the first printing pop up with 5, 9, 11, and 15 titles on the rear board, and probably other variants. But they also pop up in wrappers, which BAL missed altogether, with entirely different ads. Any copy in boards with more than 5 titles is a later binding, but can still be a first printing if it has the correct imprint (BAL got that right). (Inventory #: 55967)
$230.00 add to cart or Buy Direct from
Rulon-Miller Books
Share this item