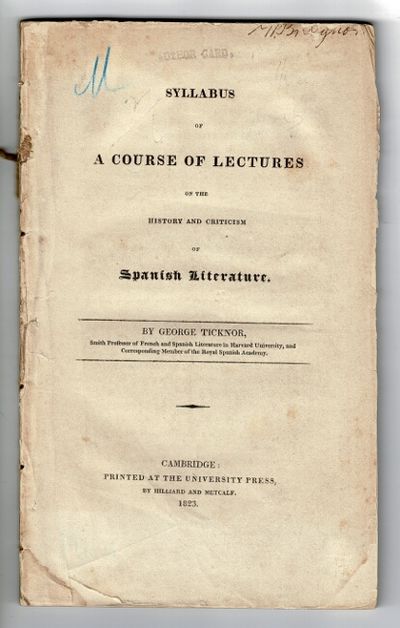 by Ticknor, George
Cambridge, Mass: at the University Press, by Hilliard and Metcalf, 1823. First edition, 8vo, pp. iv, 84; removed from binding, wrappers wanting; some soiling to title page; all else good and sound. Ticknor is arguably the most important American literary scholar of the first half of the 19th century. He was graduated from Dartmouth in 1807 at age 16. His first trip to Europe, made in 1815, lasted four years, nearly half of which was spent at Göttingen, then the leading center of German historical criticism. Upon his return to the United States Ticknor was appointed professor of French and Spanish at Harvard. Ticknor was superbly prepared to teach at Harvard. He knew several languages and literatures, had observed European modes of instruction, and was acquainted with many leading European intellectuals. He lectured on French and Spanish literature and supervised instruction by others of the French and Spanish languages.... In 1823 Ticknor and a few colleagues began a partly successful attempt to reform Harvard's rigid organization and curriculum. He built up the staff in his modern language department, notably in 1825 by the appointment of Charles Follen as the first instructor in German at Harvard. The best students in Ticknor's department included later notables such as Francis James Child, James Russell Lowell, John Lothrop Motley, Charles Eliot Norton, and Henry David Thoreau (American National Biography Online). The Syllabus was Ticknor's first publication, in the field to which he was to become the world's foremost authority. It was compiled as a guide to his Harvard lectures on the subject (amounting to 34, each an hour's duration, the full notes filling two octavo volumes). These lectures subsequently became the basis for Ticknor's magnum opus, the History of Spanish Literature (1849), "a monument to American scholarship" (DAB). He used the manuscripts of his lectures on Spanish literature at Harvard and the Spanish sections of his 14,000-volume personal library as the basis for his pioneering study. In its final form, this enormous survey has seventy-one chapters, exhaustive annotations, eight appendices, and totals 1,797 pages (ANB Online). (Inventory #: 55950)
$230.00 add to cart or Buy Direct from
rulon-miller books
Share this item