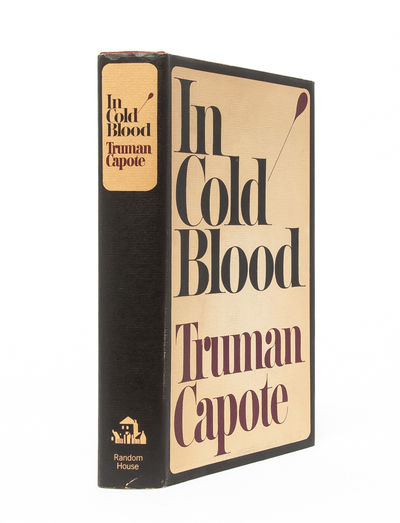 by Capote, Truman
New York: Random House, 1965. First edition. Near Fine/Near Fine. Near Fine in like jacket, with just a hint of toning to front and rear panels. Gentle rubbing to lower corners. Top stain dark. In all, a pleasing copy of this true crime narrative, which initiated a new genre.

At its initial release, In Cold Blood catapulted the already infamous Capote into an even higher authorial strata, and it earned him praise as the inventor of a new genre: the non-fiction novel. Drawing on over 8,000 pages of notes and interviews, Capote constructed a chilling true-life tale of a quadruple homicide in a small Midwestern town, examining the town members affected by the deaths as well as psychological examinations of the killers themselves. The New York Times immediately praised the book: "a masterpiece...agonizing, terrible, possessed, proof that the times, so surfeited with disasters, are still capable of tragedy.". Near Fine in Near Fine dust jacket. (Inventory #: 3425)
$500.00 add to cart or Buy Direct from
Whitmore Rare Books
Share this item