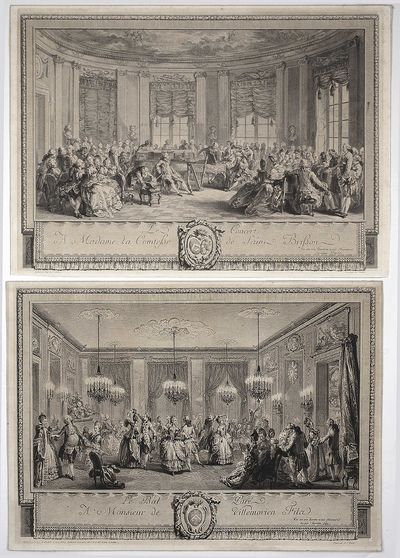 by Saint-Aubin, Augustin
1. Duclos, Antoine-Jean (Engraver, French, 1742–1795) after Augustin de Saint-Aubin, (Artist, French, 1736–1807). Le Bal Pare a monsieur de Villemorieu Fila. Paris: 1774. Third state. (Bocher, #402) Engraving and etching on laid paper. Watermarked. Sheet size 17 ½" x 12 3/4" with margins. Some browning. At lower left: Dessiné par Aug. de St Aubin Graveur du Roy Dessinateur et graveur de S. A. S. Mgr le Duc d'Orléans; Lower right: Par son tres humble et tres obeissant serviteur Chereau fila. The scene is a ball in an elegant salon. The room is lit by chandeliers and sconces, the walls are hung with paintings. At left in a raised pulpit, is an orchestra composed of five musician: four string players plus a piccolo and snare drum player. Four couples at center are performing a character dance. The rest of the assembly engages in conversation or watches the dancers. At the side, right, a man offers his arm to a woman to accompany her into an adjoining dining room. Entering from the left is a couple who appear ready to join the dance (at least he seems ready). An audience watches from the rear with a select group seated at the right front, probably the hosts. The details, particularly the faces, are carefully executed.

2. (----). Le Concert. A Madame la Comtesse de Saint Brisson; Par son très Humble et très Obéissant / Serviteur Duclos. At left margin lower: Dessiné par Aug. De St. Aubin; at right margin lower: Gravé par A.J. Duclos. Paris: ca. 1774. Third state. Bocher 403 The companion print Le Bal paré. Engraving and etching on laid paper Watermark. Plate mark 17" x 12 1/4", with margins. Some browning. The concert is set in a large salon with a painted ceiling and busts on pedestals between the windows. On three sides, an audience surrounds an ensemble of chamber musicians. At this moment, only a pianoforte, cello, violin and oboe (or transverse flute) are playing. A woman may be singing in back of the musicians. To the front left are men and women who are somewhat attentive; to the front right are young girls seated with young men hoping to meet them. A stern chaperon is in the way. These two prints were published as a pair. Comments from Affiches, Annonces et Avis divers, 14 décembre 1774: "There appear two new prints in the most pleasant genres, engraved after the drawings of M. de Saint-Aubin, by M. Duclos, and making companions. They are also worthy of decorating the most elegant Boudoirs and the Portfolios of the curious. One is titled: "Le Bal paré"; the other, "Le Concert"...[these can be had] in Paris, at Sr Chereau fils ... Price, 4 deliveries 10 s. each. Also: "There are certain prints like certain people, who seduce in spite of their faults" Courboin. p119. Ref:: Bocher, Emmanuel. Les gravures françaises du XVIIIe siècle. Libraire des bibliophiles, Paris, 1879 ; Courboin, F. Histoire illustrée de la gravure en France. Paris : Maurice Le Garrec, 1929 (Inventory #: 983811)
$1,450.00 add to cart Available from Golden Legend
Share this item
Golden Legend, Inc.
Offered by