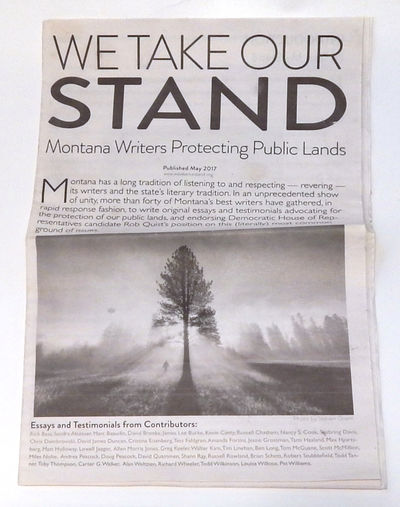 by Bass, Rick, Seabring Davis and Brian Schott [eds.]
2017. Newsprint. Near fine. Folio (27 x 43 cm), pp. 24. Newsprint insert that ran in advance of the 2017 runoff for Montana's sole Congressional seat, which was vacated when Ryan Zinke became Trump's first Secretary of the Interior. Includes contributions from 42 of Montana's preeminent conservation writers, poets and artists, including Russell Chatham, Thomas McGuane, Doug Peacock, David James Duncan, James Lee Burke, David Quammen and Rick Bass. This copy is fine but for two small spots on the front page. That race, between beloved Montana folk singer Rob Quist (of the Mission Mountain Wood Band) and Bozeman-area businessman Greg Gianforte, was most memorable for Gianforte's physical attack on a reporter from The Guardian who was asking about the candidate's health care policy (the "body-slam" heard 'round the world). All contributors were subsequently served with a complaint through the Federal Election Commission at the request of the Lewis and Clark County Republicans, based on allegations that they had coordinated with the Quist campaign (charges that were later dismissed).The purpose of the publication was to highlight the importance of wild lands, and encourage conservation policies on public lands. 35,000 copies were distributed through daily newspapers in Bozeman, Libby and the Flathead Valley, as well as by hand. (Inventory #: 29071)
$50.00 add to cart Available from Elk River
Share this item