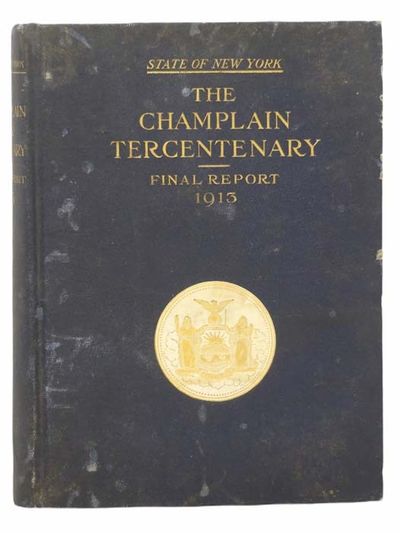 by Hill, Henry Wayland
Albany: J.B. Lyon Company, State Printers, 1913. Hard Cover. Very Good/No Jacket. Light smudges on front board, edge of front board rubbed. 1913 Hard Cover. xv, 325 pp. 4to. Original navy blue cloth, gilt titles, vellum state seal on front board. The final report of the New York Lake Champlain Tercentenary Commission. Contents: Memorials to Samuel Champlain: Construction of Memorials; The Allegorical Bust 'La France' and the personnel and mission of the French delegation; Social functions and hospitalities extended to the French Visitors in New York, Washington, Philadelphia, Boston and elsewhere; Banquet at the Waldorf-Astoria Hotel, New York City, May 1, 1912, and the presentation of Rodin bust, 'La France'; French Delegation entertained by the Chamber of Commerce of the State of New York; French Visitors and Commissioners entertained at Ticonderoga, later Inspect the Champlain Memorial Lighthouse at Crown Point Forts where they formally place the Bust, La France, and then journey to Plattsburgh, Report to Paris; They visit Canada, Niagara Falls and sail for France. Impressions and comments by French visitors on experiences in America; Impressions of M. Rene Bazin; Commen in appreciation of the visit of the French delegation and Honors conferred; Dedicatory Ceremonies: Preparation for Dedicatory Ceremonies, including Military Functions; Unveiling Tablet at the English Fort; Dedicatory Ceremonies of the Champlain Memorial Lighthouse at Crown Point Forts, July 5, 1912; Sail down the Lake to Bluff Point; Call at the Summer School, Review of the Fifth Infantry regiment, U.S.A. at Plattsburgh Barracks. Tour of the city. Reception given by the Hon. Smith M. Weed and luncheon at the Fourquet House; Dedicatory Ceremonies of the Champlain Memorial Statue at Plattsburgh, N.Y., July 6, 1912; Conclusion: Federal Co-operation and assistance rendered by Senators of the United States, Representatives in Congress and others; Brief review of the work of the Commission and acknowledgments in appreciation of assistance rendered by the representatives of Foreign nations, military organizations and others; Historical significance of the Tercentenary Celebration; Representative Men of the Champlain Region; Conclusion of the work of the New York Lake Champlain Tercentenary Commission; Appendix: Report of House Committee on Foreign Affairs; English forts; Report of Captain Edward Mott; Notes on the archaeology of the Champlain valley by Prof. George H. Perkins, Ph.D., state geologist of Vermont; Financial Statement; Index. (Inventory #: 2303626)
$10.00 add to cart or Buy Direct from
Yesterday's Muse
Share this item
Yesterday's Muse, Inc.
Offered by