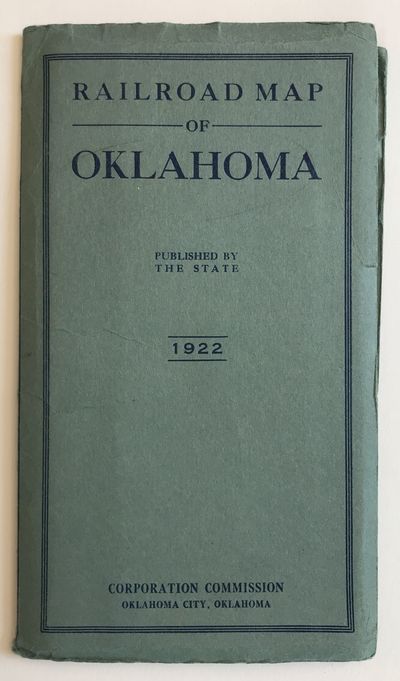 by [Oklahoma]. [Railroads]
Des Moines: Kenyon Company, Inc, 1922. About very good.. Large folding map, color printed, 27 x 51.5 inches. Original printed wrappers. Minor wear to wraps. One separation along fold from top edge extending into map area. Light tanning. A scarce, attractive, and huge color map of the railroad system in Oklahoma during the early 1920s. The map depicts the paths of thirty-three steam and electric railroad lines across the state, with an inset legend listing each and containing illustrations of a gushing oil well and a passenger train with a group of customers gathered on the rear porch of the caboose. The lines of large steam railroad companies are delineated in various colors, with each stop identified, and the distances between each station marked. The map is also quite interesting for its inclusion of electric train lines, which were growing out of larger population centers such as Oklahoma City, Tulsa, Muskogee, and McAlester at this time. Several editions of the map, all scarce, were published in the late 1910s and 1920s at the behest of the Corporation Commission of Oklahoma that chart the growth of the state railroad system during that time. We locate four copies of the present work, at the Oklahoma Historical Society, Kentucky, Wisconsin-Milwaukee, and the Newberry. (Inventory #: 1310)
$650.00 add to cart Available from
McBride Rare Books
Share this item