The Oasis of Texas [cover title] 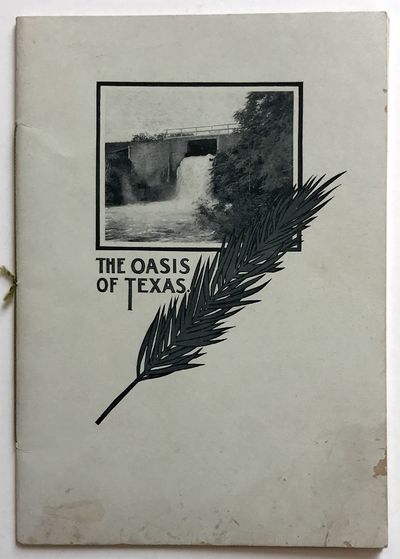 by [Texas]. Brown, C.A.
New Braunfels, Tx, 1902. Very good.. [32]pp. Original pictorial wrappers, stitched. Light wear and dust soiling to wraps. Light toning internally. Scarce, first edition of this early 20th-century promotional for New Braunfels, Texas, and the businesses operated there by the Landa Estate. By the end of the 19th century, the Landa family owned much of the major industry in the town, including the grain mills, the cotton oil factory, the ice company, the local light and power company, stockyards, and irrigated farms, and had built the large public park at the center of town named for the family. The present work gives a history of New Braunfels, the settlement of the Landas there with other German immigrants in the mid-19th century, the development of their business empire, and extensive description of their operations and of their contributions to the town as they stood in 1902. The pamphlet is illustration with numerous photographic images the Landa properties, Landa Park, and New Braunfels in general. A second edition is much more common; we locate copies of the present first edition at SMU and the San Antonio and New Braunfels Public Libraries. (Inventory #: 1309)
$375.00 add to cart Available from
McBride Rare Books
Share this item