The Chinese, Their History and Culture (Two volumes in one) 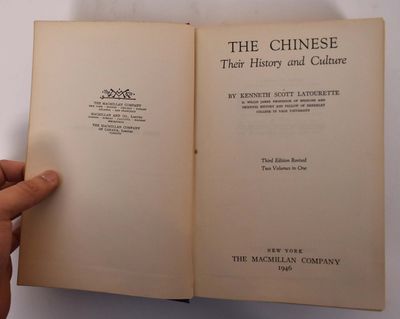 by Latourette, Kenneth Scott
New York: The Macmillan Company, 1946. Third Edition Revised. Hardcover. VG (light bumping to corners and age tanning but pages otherwise clean). Navy cloth boards with gilt lettering on spine, xvi, 847 pp, bw fold out map. This is the third edition, revised with two volumes in one. Contents include: v. I. Preface to the third edition ; Geography and its influence on the Chinese ; The beginnings of Chinese civilization (to 221 B.C.) ; The formation of the empire : the Ch'in and Han dynasties (221 B.C.-A.D. 220) ; A striking change : divisions, foreign invasions, and cultural innovations from the close of the Han to the beginning of the Sui Dynasty (A.D. 220-589) ; Reunion and renewed advance : the Sui (A.D. 589-618) and T'ang (A.D. 618-907) dynasties ; Political weakness but cultural brilliance : the Five Dynasties and the Ten Kingdoms (A.D. 907-960) : the Sung Dynasty (A.D. 960-1279) ; China under the rule of the Mongols (A.D. 1279-1368) ; China again under Chinese rule : the Ming Dynasty (A.D. 1368-1644) ; The Ch'ing (Manchu) Dynasty : its heyday and the beginning of its decline (A.D. 1644-1838) ; The transformation wrought by the impact of the Occident : I. The empire is shaken by wars with western European powers and the resulting treaties and by internal rebellions (A.D. 1839-1860) ; The transformation wrought by the impact of the Occident : II. Partial recovery from the shocks of the preceding two decades : the restoration of internal order but the slow permeation of the empire by Occidental trade and ideas and the failure to accommodate the old to the new (A.D. 1861-1893) ; The transformation wrought by the impact of the Occident : III. The crumbling of the structure of the old culture and the fore- shadowings of the new (A.D. 1894-1945) ; The transformation wrought by the impact of the Occident : IV. The Communists capture the mainland and undertake the thorough remaking of China (A.D. 1945- ) -- v. II. The Chinese people : racial composition ; Government ; Economic life and organization ; Religion ; Social life and organization ; Art ; Language, literature, and education ; By way of summary ; Proper names and Chinese words used in the text and their corresponding characters. Includes bibliography at the end of each chapter (except the last) and index. (Inventory #: 176592)
$40.00 add to cart or Buy Direct from Mullen Books
Share this item