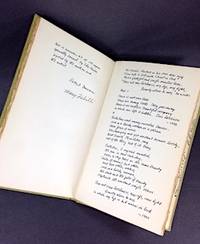 by DUNCAN, Robert.
Berkeley: Bern Porter,, 1947.. First edition, numbered & signed issue. 33 pp. Fine in full light green cloth with gilt stamping to spine. Lacks the rare dust jacket, which was not added to most copies in this issue. Poems with drawings by Mary Fabilli. One of 100 numbered copies SIGNED by Duncan and Fabilli. Opposite the holograph colophon statement are two poems entirely in Duncan’s hand. Additionally INSCRIBED by Duncan on the third leaf, “inscribed for / Ruth Witt Diamant / October 1947 / Robert Duncan.” Duncan would later work as Witt-Diamant’s assistant director at the Poetry Center for several years. Bertholf A1b. (Inventory #: 70392)
$1,500.00 add to cart Available from
Jeff Maser, Bookseller
Share this item

Redcat/Califoria Institute of the Arts , (2003).
(click for more details about Emerson Woelffer: A Solo Flight.)