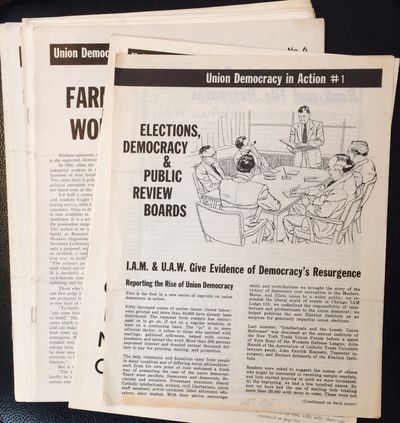 New York: Union Democracy in Action, 1961. Twelve issues of the rank and file reform newsletter; 4 to 20 pages per issue, 9x12 inches; first issue folded with a closed edge tear, another with pen notation, otherwise generally very good. Numbers present are 1, 4, 6-15. Coverage of cases related to union democracy and rank-and-file activism, including legal challenges. Issue 6 has a cover story on farm workers, "the neglected, ill-treated stepchild of American liberalism," and number 13 has a cover story on "Harry Bridges' own witch hunt," accusing the ILWU leader of purging dissidents in an ironic turnabout from his own experience a decade before. (Inventory #: 250050)
$95.00 add to cart or Buy Direct from Bolerium Books
Share this item