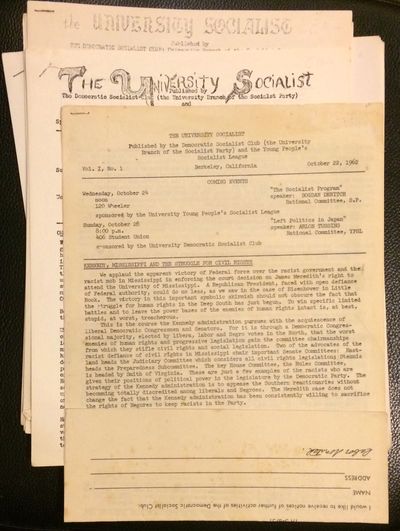 Berkeley: Democratic Socialist Club: University branch of the Socialist Party; and the Young People's Socialist Club, 1964. Eleven issues of the mimeographed newsletter, mostly 8.5x11 inches. Issues present are Vol. 1 no. 1, a special issue from a few days later about the Cuban Missile Crisis, vol. 1 no. 2, vol. 2 nos. 2, 3, 7-10, and vol. 3 nos. 1 and 2. Much coverage of the Civil Rights movement, including support for the March on Washington and Southern sit-ins, as well as student activism in the Berkeley area, such as picketing stores on Shattuck that did not have Black employees. (Inventory #: 250054)
$175.00 add to cart or Buy Direct from Bolerium Books
Share this item