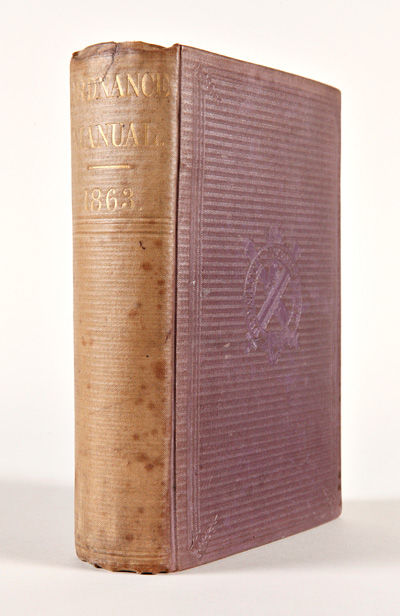 by Gorgas, Josiah: Laidley, Theodore T.S.
Charleston, S.C.: Evans & Cogswell, 1863. 546pp. plus thirty-three plates. Publishers' patterned purple cloth with Ordnance Department device embossed on front and rear boards, spine gilt. Spine sunned, with repair to small tear at head of spine, boards lightly edgeworn. Contemporary ownership inscription on front pastedown. Light tanning. Very good. An attractive copy of the first edition of the Confederate Army's manual for ordnance officers, prepared by Col. Josiah Gorgas, the logistical genius of the rebel war effort. As stated in the Preface, "This Manual is adapted, with some necessary changes, omissions, and alterations, from the Ordnance Manual of the United States service of 1861, prepared under the immediate direction of Major Laidley. The material of the two services is, of course, nearly identical, differing only in the shape of the new Columbiads and the Rifle Guns, and the addition to our service of the Mountain Rifle of 2.25 inch. It may be added that the labor of Ordnance officers now in the service of the Confederate States, has contributed to this new edition of the United States Manual." Evans & Cogswell were also the printers of the 1861 edition. The extensive text covers all manner of question and issues related to military ordnance, while the nearly three dozen plates show cannons, mounted guns, muskets, small arms, saddles, harnesses, and much more.

Theodore T.S. Laidley (1822-86) born in Virginia, was a long-time ordnance officer. After the Mexican-American War, he served as Assistant Ordnance Office at Fort Monroe, Virginia, and was then made Commander of the Charleston Arsenal in South Carolina. In 1858, the Army's Chief of Ordnance placed Laidley on detached service to write a new ordnance manual. His comprehensive manual was reprinted several times and served as an essential guide for ordnance officers in both the North and South during the Civil War. Laidley himself remained with the Union at the outbreak of the war, and was initially appointed mustering officer for New Jersey. He then took command of the Frankford Arsenal in Philadelphia, and was tasked with expanding wartime ordnance manufacturing.

The career of Josiah Gorgas (1818-83) followed Laidley's closely, with the ironic difference that while Laidley was born in Virginia and remained loyal to the Union, Gorgas was born in Pennsylvania but sided with the Confederacy. Like Laidley, Gorgas also served in the Mexican-American War and upon return to the U.S., was also assigned to Fort Monroe. It is likely that the two knew each other. Gorgas was commander at the Frankford Arsenal at the outbreak of the war, and supported secession. He left Philadelphia for Richmond and was appointed Chief of Ordnance for the Confederacy. In that role, he was one of the heroes of the Confederate war effort. James McPherson, noting the relatively weak pre-war manufacturing capabilities of the South, writes: "The Ordnance Bureau was the one bright spot of Confederate supply....Gorgas proved to be a genius at organization and improvisation. He almost literally turned plowshares into swords."

Columbia, Mo. : University of Missouri Press , 1985
(click for more details about VIEWS AND VIEWMAKERS OF URBAN AMERICA LITHOGRAPHS OF TOWNS AND CITIES IN THE UNITED STATES AND CANADA, NOTES ON THE ARTISTS AND PUBLISHERS, AND A UNION CATALOG OF THEIR WORK, 1825 - 1925)

[N.p., but likely Virginia 1865
(click for more details about THE 24th CORPS [manuscript title])
View all from this seller>