A BIOGRAPHICAL SKETCH OF THE LIFE OF WILLIAM B. IDE: WITH A MINUTE AND INTERESTING ACCOUNT OF ONE OF THE LARGEST EMIGRATING COMPANIES. (3000 MILES OVER LAND), FROM THE EAST TO THE PACIFIC COAST. AND WHAT IS CLAIMED AS THE MOST AUTHENTIC AND RELIABLE ACCOUNT OF "THE VIRTUAL CONQUEST OF CALIFORNIA, IN JUNE, 1846, BY THE BEAR FLAG PARTY." 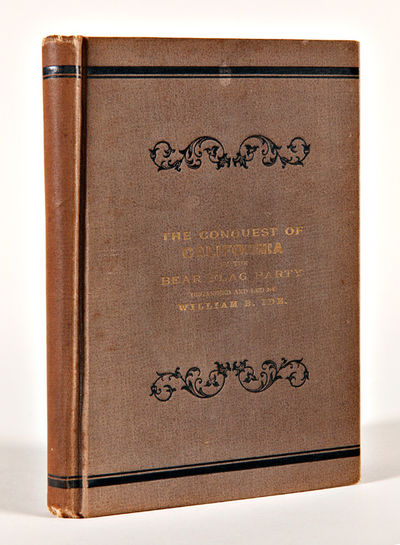 by [Ide, Simeon]
[Claremont, N.H.]: Published for the subscribers, 1880. [2],239,[1]pp. Half title. 12mo. Original brown cloth, gilt. Cloth moderately faded, light edge wear. Rear hinge very mildly cracked, but still holding firm. Quite clean internally. Very good. William Ide emigrated to California in 1845, and a year later, after rumors that the Mexican Republic was going to expel all non- citizens, he led a group of settlers in what became known as the Bear Flag Revolt. The rebellious Americans raised the California Bear Flag and took control of the Sonoma pueblo, and Ide was named Commander of the California Republic. Afterwards most of the party joined Lieut. Col. John C. Fremont in seizing California from Mexico.

"This SKETCH contains an account of the early years of W.B. Ide, recollections by his daughter of the family's trip across the plains to California in 1845, and an account of the Bear Flag revolt of 1846 as told by Ide to his brother in 1849, and in a letter to a Senator Wambough which, as Ide died in 1852, must have been written within a few years of the event. [An] interesting account of the overland journey of 1845 and important source on the beginnings of American rule in California in 1846..." - Streeter. The work is also important in that it is one of the few overland journals written from the point of view of a woman (Ide's daughter, who in 1845 at age eighteen accompanied her father west). Howes speculates that this first edition, printed by the author at the age of eighty-six on a handpress, "was probably small." The Streeter copy sold to Michael Ginsberg, then with Western Hemisphere, for $175 in 1968.