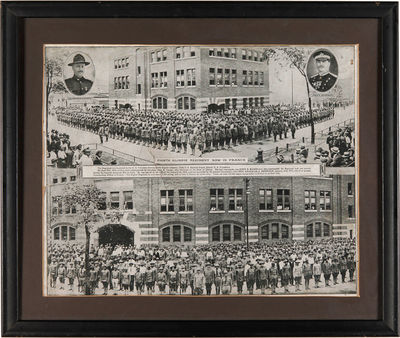 by [African American Photographica]: [World War I]
[Chicago]: E.G. Renesch, 1918. Photographically-illustrated lithographic broadside, approximately 15 x 19 inches. Minor soiling, a couple short closed tears on left side, three-inch closed diagonal tear in center portion. Good overall. Matted and framed. A handsome photo-collage showing the African- American soldiers and officers of the Eighth Illinois Regiment who fought in France during World War I. The upper portion is composed of two angled photographs showing hundreds of African-American soldiers, with two oval portraits of commanding officers Col. Franklin H. Denison and John R. Marshall inset in the corners. Though they were also African Americans, both Denison and Marshall are depicted as light-skinned in the present portraits. The lower portion is a small- format panorama showing several hundred more soldiers from the Eighth Illinois. The text at middle, just below the caption title, provides background on the unit and its commanders: "The Regiment was mustered in the U.S. Volunteer Service as the Eighth Infantry, 370th U.S. National Guard, Illinois U.S. Volunteers. On June 28th, 1898, officers were commissioned by Governor John R. Tanner, then Governor of the State of Illinois. The first commander was John R. Marshall who commanded the Regiment and saw service during the Spanish American War in Cuba. He was placed on the retired list January 1st, 1914, and was succeeded by the present Commander, Colonel Franklin H. Denison, January 12th, 1914, who is at present Commanding Officer in France. The Eighth Regiment is now about 3,000 strong, and is now in France on active duty. There are over 157,000 negro troops either in France or on their way." The Eighth Illinois Regiment was based in Chicago, and for a long time was the only American service unit commanded by black officers. The unit served in the Spanish American War, but the conflict was largely over by the time they arrived in Cuba. Later, the Eighth Regiment Armory was built in Chicago in 1914, the first armory constructed by the American military specifically for an African-American regiment. The Eighth Illinois fought with distinction in Europe during World War I, after mustering into service in August 1917. The unit was redesignated that December as the 370th Infantry, and was one of the fiercest units in France, earning the nickname "Black Devils" by German soldiers fighting in the Argonne Forest. The Victory Monument in Chicago was built in 1927 to honor the Eighth Illinois. A rare image of a notable African-American military regiment, with no copies listed in OCLC. (Inventory #: WRCAM55480)
$700.00 add to cart or Buy Direct from
William Reese Co. - Americana
Share this item