AN ADDRESS ON THE ORIGIN AND PROGRESS OF AVARICE, AND ITS DELETERIOUS EFFECTS ON HUMAN HAPPINESS, WITH A PROPOSED REMEDY FOR THE COUNTLESS EVILS RESULTING FROM AN INORDINATE DESIRE FOR WEALTH 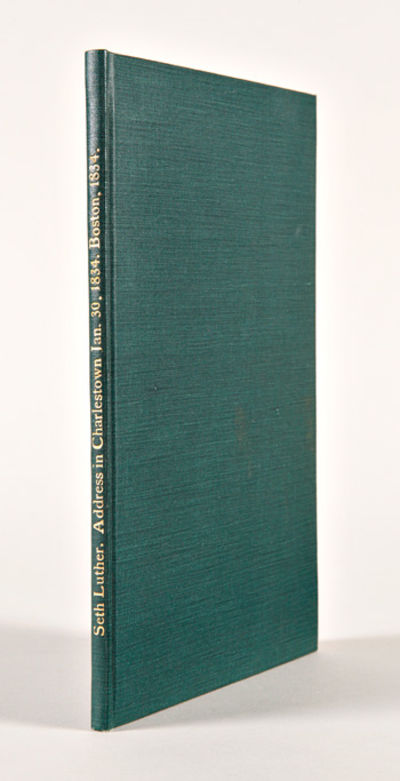 by Luther, Seth
Boston: Published by the Author, 1834. 43pp. Modern green cloth, gilt spine title. Faint foxing, small American Antiquarian Society deaccession stamp on verso of last text leaf. Very good. A rare early work by Rhode Island labor organizer Seth Luther, following his first printed work, AN ADDRESS TO THE WORKING-MEN OF NEW-ENGLAND... and his AN ADDRESS ON THE RIGHT OF FREE SUFFRAGE published the previous two years. Seth Luther (1795-1863) was born in Providence, Rhode Island and worked as a carpenter by trade. Like his earlier publications, the present ADDRESS was printed from a speech Luther delivered, this time before the Union Association of Working Men in Charlestown, Massachusetts in late January 1834. Setting the tone for the speech in the first paragraph, Luther rails against those "clothed in purple and fine linen" on the backs "of those who labor day after day." The present work is further described by the DICTIONARY OF AMERICAN BIOGRAPHY, as follows: "[A] denunciation of political and religious as well as economic oppression...the author laid down the following program of reform: universal equal education by means of manual labor schools supported at the public expense; abolition of all licensed monopolies; abolition of capital punishment and of imprisonment for debt...equal taxation for property; and an effective mechanic's lien law. His deadly sincerity, forceful language, grim humor, and biting sarcasm made his pamphlets valuable weapons in the labor movement."

This title is rare, with this copy being the only one appearing in Rare Book Hub, formerly offered by M&S Rare Books. Not in Sabin. OCLC seems to report about a baker's dozen physical copies over several records. This is the first copy ever handled by this firm. Adams, RADICAL LITERATURE IN AMERICA, p.43. AMERICAN IMPRINTS 25382. ANB 14, pp.151-52. DAB XI, p.511. (Inventory #: WRCAM55483)
$2,000.00 add to cart or Buy Direct from
William Reese Co. - Americana
Share this item

[New Bern, N.C. : Printed by James Davis , 1762
(click for more details about AN EPISTLE TO FRIENDS IN GREAT BRITAIN, TO WHOM IS THE SALUTATION OF MY LOVE, IN THE UNCHANGEABLE TRUTH [caption title])

TAXATION NO TYRANNY; AN ANSWER TO THE RESOLUTIONS AND ADDRESS OF THE AMERICAN CONGRESS

London : Printed for T. Cadell , 1775
(click for more details about TAXATION NO TYRANNY; AN ANSWER TO THE RESOLUTIONS AND ADDRESS OF THE AMERICAN CONGRESS)
View all from this seller>