RECONSTRUCTION ON "MY POLICY;" OR, ITS AUTHOR AT THE CONFESSIONAL 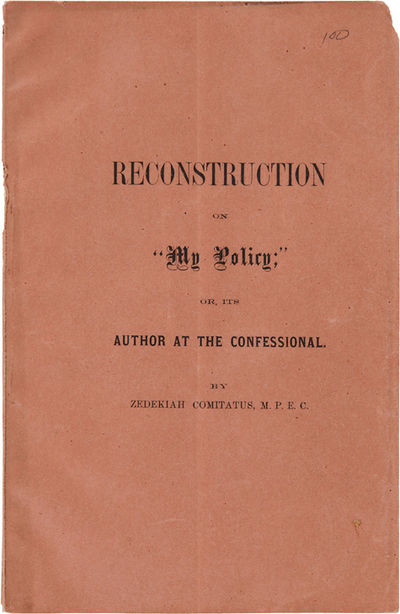 by Comitatus, Zedekiah
Skaggaddahunk [i.e. New York?]: Scantlewood, Timberlake & Co., Printers to the "North River Society,", 1866. 29pp. Original printed brown wrappers. Minor edge wear, soft vertical crease throughout, top corner of most leaves slightly chipped, sizeable chip to last leaf and rear wrapper. Final five text leaves dampstained. Good plus. A scarce, pseudonymous satirical poem on Reconstruction, with a fabricated imprint, by "Zedekiah Comitatus," the NOM DE PLUME of an unknown 19th-century literary fantasist. Comitatus also wrote a fictitious diatribe against Chares Dickens' visit to America entitled AN EPISTLE TO "BOZ" ALIAS CHARLES DICKENS under the same "Skaggaddahunk - Scantlewood, Timberlake" imprint. The present work is written from the first-person perspective of Andrew Johnson, who claims that what he has "endured / In reconstructing on the scheme of Davis, Weed and Mister Seward, Would make the devil's angels scream!" The narrator then goes on to visit various states where his plan of Reconstruction - his "policy" - faces constant friction. He also rails against his legislative foes: "Congress is a conspiracy / Of wicked usurpation; / And means, I think, to ruin me, / And make laws for the nation." By the end, he resolves to flee back to the White House, "With Presidential ease; / And hid myself like a sly mouse, / In a voluptuous cheese." And he admits that: "'My policy' has prov'd a sham, / And I, myself, am little less / For both are futile as a d-- n, / And justly scouted by Congress." The author's pseudonym is reminiscent of the idea of POSSE COMITATUS, uncompensated, temporarily-deputized citizens who assisted law officers in the 19th century, often compelled to do so. SABIN 14952. (Inventory #: WRCAM55479)
$150.00 add to cart or Buy Direct from
William Reese Co. - Americana
Share this item

London 1692
(click for more details about AN ACT DECLARING THE RIGHTS AND LIBERTIES OF THE SUBJECT, AND SETTLING THE SUCCESSION OF THE CROWN. [bound in:] [SAMMELBAND OF EIGHTY PARLIAMENTARY ACTS])
View all from this seller>