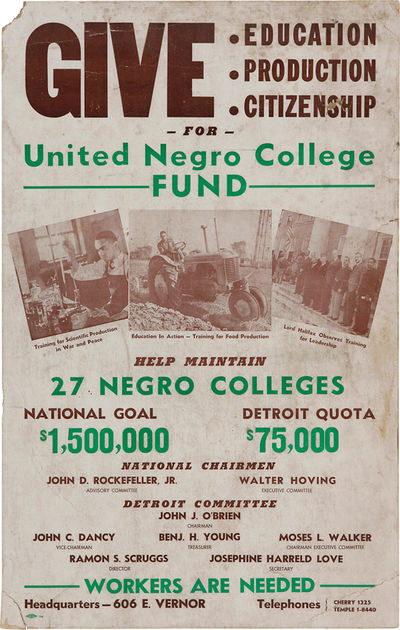 by [United Negro College Fund]
[Detroit, 1944. Illustrated broadside, printed on thick cardstock, 21 3/4 x 13 3/4 inches. Soiling, chipping, closed edge tears, and creasing. Good condition. An extraordinary survival - a large-format illustrated fundraising poster for the Detroit chapter of the United Negro College Fund (UNCF), in the first year of the organization's existence. Though the poster is undated, it likely emanates from 1944, the founding and initial fundraising year for UNCF, when its national fundraising goal was $1.5 million and the number of schools involved with the group was twenty-seven. The fundraising "quota" for the Detroit area was $75,000, as stated here. The poster is printed in brown and green, urging potential donors to "help maintain 27 Negro Colleges." Three photographs are printed in brown in the middle of the poster, showing a young African- American man in a laboratory ("Training for Scientific Production in War and Peace"), a young man on a tractor ("Education in Action - Training for Food Production"), and an image of several men standing on the steps of a government building, captioned "Lord Halifax Observes Training for Leadership." Both national committee members (including John D. Rockefeller, Jr.) and the local "Detroit Committee" are listed at the bottom, just above a notice that "Workers are Needed" and listings of the address and phone number for the Detroit office.

The United Negro College Fund was founded in 1944 to address inequities in higher education funding and opportunities for African-American youth by appealing to the "national conscience." The organization focused on private, historically-black colleges and universities, and initially sought funding solely from the African- American community. Over the last seventy- five years, the organization has grown to assist almost forty schools of higher education and advocate for K-12 education, and has raised more than $5 billion to help over half a million students earn college degrees.

No copies of this fundraising poster are listed in OCLC, nor in any source we can locate. It is a rare surviving artifact from the founding year of one of the most important organizations devoted to African- American higher education. Marybeth Gasman, ENVISIONING BLACK COLLEGES: A HISTORY OF THE UNITED NEGRO COLLEGE FUND (Baltimore: The Johns Hopkins University Press, [2007]). (Inventory #: WRCAM55481)
$750.00 add to cart or Buy Direct from
William Reese Co. - Americana
Share this item

[VERNACULAR PHOTOGRAPH ALBUM RECORDING THE LIFE OF A YOUNG FAMILY IN THE PACIFIC NORTHWEST, AND THEIR LATER ACTIVITIES AS METHODIST MISSIONARIES IN CHINA]

[Various locations in the Pacific Northwest and Foochow, China 1920
(click for more details about [VERNACULAR PHOTOGRAPH ALBUM RECORDING THE LIFE OF A YOUNG FAMILY IN THE PACIFIC NORTHWEST, AND THEIR LATER ACTIVITIES AS METHODIST MISSIONARIES IN CHINA])
View all from this seller>