PRELIMINARY ARTICLES OF PEACE, BETWEEN HIS BRITANNICK MAJESTY, THE MOST CHRISTIAN KING, AND THE CATHOLICK KING. SIGNED AT FONTAINEBLEAU, THE 3d DAY OF NOVEMBER, 1762 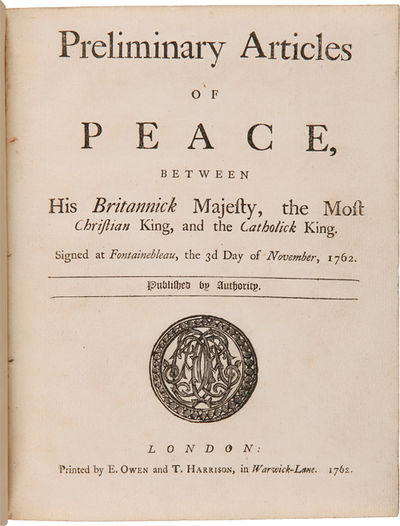 by [Treaties - Great Britain]
London: Printed by E. Owen and T. Harrison, 1762. 23pp. printed in double-column format in parallel French and English. Quarto. 19th-century three-quarter calf and marbled boards, spine gilt. Minor wear to corners and edges. A few pencil marks, light toning. Very good. The rare preliminary edition of the 1763 Treaty of Paris, which ended the global Seven Years' War (called the French & Indian War in North America) between Great Britain, France, and Spain, and set the conditions for the American Revolution. The three countries involved had been exhausted and grew deeply indebted by the war when they came to the negotiating table in late 1762. Britain, however, had made the most territorial gains during the conflict and therefore had the most bargaining power over the peace terms. The articles contained here conform largely to the final definitive version of the treaty, which was approved a few months later in February 1763.

This is the first publication in English of one of the most far-reaching and significant peace treaties to deal with North America. By terms of this treaty, printed here for final ratification and made official in 1763, major shifts in the American balance of power take place. The French are almost entirely expelled from North America, as their Canadian possessions and all lands east of the Mississippi are ceded to the British. The remainder of Louisiana goes to the Spanish. The Spanish give up claims in Florida to the British, who also receive the Grenadines and Dominica. All the French receive is the return of Martinique, Guadeloupe, and several smaller Caribbean islands. The new balance of power set the stage for the American Revolution and the formation of the United States. HOWES P569. SABIN 65044. SERVIES 423. DAVENPORT 148. ESTC T98518. REESE & OSBORN, STRUGGLE FOR NORTH AMERICA 56. (Inventory #: WRCAM55478)
$7,500.00 add to cart or Buy Direct from
William Reese Co. - Americana
Share this item