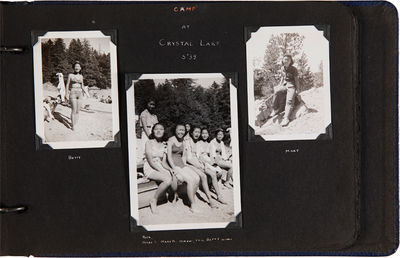 by [Japanese Americana]: Nomura, Asako
[Los Angeles, 1942. Photograph album and six partially printed documents completed in type and manuscript, as described below. All in very good or better condition. A small but important archive of photographs and school- related documents belonging to Japanese-American Los Angeles resident, Asako Nomura. Nomura attended Le Conte Junior High School and then Hollywood High School, graduating from the latter in June 1942. Three months prior to graduation, Nomura was ordered to be evacuated along with some 120,000 other Japanese Americans after President Franklin Roosevelt issued Executive Order 9066 on February 19, 1942. According to 1940 census data, and confirmed by one of the present documents, Asako Nomura lived at 1126 1/2 Cahuenga in Los Angeles with her father, mother, and three siblings. Her father, Hyoshiro Nomura was a councilor for the Los Angeles Japanese Association, an adviser for the Higashi Hongwanji Buddhist Temple and is listed on the roster of these organizations in a House Un- American activities committee report in 1942. He is also listed as a detainee at the Tuna Canyon Detention Station in Tujunga, a converted Civilian Conservation Corps camp that was used as a civilian detention center from December 16, 1941 to October 31, 1943. It is unclear where Asako Nomura was sent after the evacuation order was enacted, but she is pictured as an employee in a press photograph held at the Bancroft Library for the Leave Application Department in March 1944, where she apparently helped Japanese Americans apply for and obtain permanent leave from relocation centers. The present archive includes the following items, in chronological order: 1) Photograph album. 1938-1940. Oblong quarto. Contemporary black leatherette two-ring binder, gilt title on front cover. Forty-one photographs, measuring from 5 1/2 to 9 3/4 inches to 4 1/2 x 3 1/4 inches, including ten laid in, some with manuscript captions or annotations. Couple of leaves detached, but photographs in very good or better condition. The images include several photographs of Nomura's various school classes, such as the "Aud Ushers," the student workers in the attendance office, her homeroom class, the "Typing Awards" winners, and other unlabeled examples. Following the class pictures, Nomura has kept photographs of herself and her friends in various settings, including home, the beach, Camp Crystal Lake, Camp Big Pines at Jackson Lake, a desert "Boom Town," and other locations. The photographs provide a nice view of the life of a carefree Japanese- American young woman in the late 1930s. A few of the photographs are inscribed to Asako. 2) ADVANCED CERTIFICATE OF PROFICIENCY TYPEWRITING. Dated June 1939, 5 x 6 1/2 inches. A partially-printed certificate awarding Nomura for her typewriting proficiency of forty-four words per minute with only two errors. Signed by her instructor and her principal. 3) LOS ANGELES CITY SCHOOL DISTRICT TYPEWRITING CERTIFICATE. 50-WORD AWARD. Dated January 10, 1940, 2 1/4 x 4 inches. Another award for Nomura's typewriting skills, this time for fifty-one words per minute with only one error. Perhaps it was Nomura's clerical skills that helped her gain employment just a few years later at the Leave Application Department during the internment period. 4) LETTER AWARD. Dated "Winter 1939," 7 3/4 x 10 inches. A partially-printed certificate for Nomura from Le Conte Junior High School, awarding her a school letter in Physical Education. Signed by the director of the program and the school principal. 5) PUPIL ACCOUNTING REPORT. Dated March 25, 1942, 5 x 8 inches. A partially-printed Hollywood High School attendance form issued a month after Roosevelt's Executive Order 9066, with a direct relationship to the exclusion order. In the printed line stating "The pupil named above is hereby released from this school to attend:_________" the blank is filled in with the single typewritten word, "Evacuation." Also, the "New Address" line is filled in with the typewritten word, "Unknown." Both of these lines are sad reminders of the impact of the Japanese-American internment program, here affecting the life of a young senior in high school set to graduate three months later. 6) [HOLLYWOOD HIGH SCHOOL GRADUATION PROGRAM]. June 25, 1942. [7]pp. 12mo. Original printed wrappers, stapled. Contains the events of the graduation ceremony, along with the list of graduates. The fifth page lists Asako Nomura, though it is not known whether she attended the graduation ceremony or graduated in absentia. 7) [HOLLYWOOD HIGH SCHOOL DIPLOMA]. Dated June 26, 1942, 6 x 8 inches, housed in a leatherette holder, gilt. Nomura's high school diploma, given to her by the Los Angeles City High School District for completing her course of study and for showing herself "worthy in Character and Citizenship...." These last words are ironic, at the least, considering the fates suffered by most Japanese Americans during this time. This is the first group of material we have seen from a Japanese-American student at the moment of relocation, a poignant record of a sad moment in modern American history. (Inventory #: WRCAM55178)
$3,750.00 add to cart or Buy Direct from
William Reese Co. - Americana
Share this item