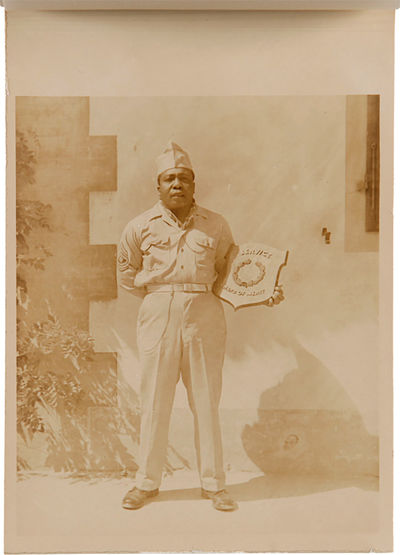 The album opens with a photograph of the entrance to the company's "Bivouac Area" and an image of the Villa Traxler in Nugola, Italy, which is captioned as "Occupied by 604th Ordnance Ammunition Company." Then, following the images of Biggerstaff and the senior officers, the album features a series of photographs depicting the African-American junior or non-commissioned officers and personnel, beginning with First Sergeant Leroy Crosby. After Crosby's photograph, the album includes group photographs of Crosby with his other five staff sergeants; the company headquarters personnel; the depot office personnel (gathered around a small cannon); kitchen staff; the motor pool (with a separate photograph of their vehicles); separate group pictures of the first, second, and third magazine platoons; the service and supply section; the guard mount; and a photograph of the remaining members of the company who did not appear in the other images. Especially useful in this album are the captioned tissue guards before each photograph, which identify each soldier by name and rank.

The album was likely made by or at the behest of commanding officer Edward D. Biggerstaff in an unknown quantity. It appears to be quite rare, as we can locate no other copies in OCLC, auction records, or the trade (Inventory #: WRCAM55486)
$750.00 add to cart or Buy Direct from
William Reese Co. - Americana
Share this item