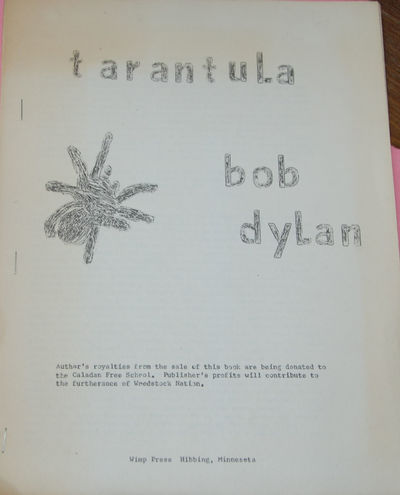 by DYLAN, Bob
Hibbing, Minnesota: Wimp Press, 1966. First Edition (Pirated). 4to, stapled wraps,pp. 54, Stapled wraps, little tanned at the edges, mimeographed. FROM THE PUBLISHER - Accumulation of prose and poetry from a musician and personality of the 60s. In 1964 Dylan signed with Macmillan to write a book called Tarantula. It s about spiders, he said. Galley proofs were ready in 1966, but publication was suspended after Dylan s motorcycle crash later in the year. Numerous bootlegged editions appeared before Macmillan published the novel in 1971. (Inventory #: 59438)
$2,750.00 add to cart or Buy Direct from
Second Life Books
Share this item

IF BEALE STREET COULD TALK; a novel by the author of Another Country

NY : The Dial Press , 1974
(click for more details about IF BEALE STREET COULD TALK; a novel by the author of Another Country)
View all from this seller>