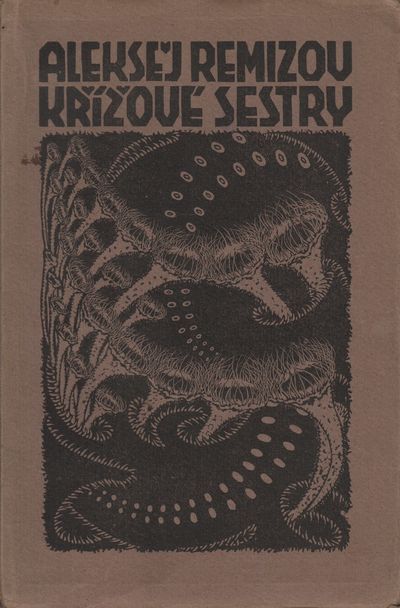 by Remizov, Aleksei (Aleksej) and František Horký, illustrator
Prague: Kamilla Neumannová, [1916]. Octavo (21.8 × 14 cm). Original pictorial wrappers with a woodcut design by Horký; 157, [2] pp. Small nick to lower spine; light wear to overlapping wrapper edges; still about very good. First and only edition thus of this Czech translation of Remizov's "Krestovye sestry," the 1910 symbolist novel. Aleksei Remizov (1877-1957) was one of the most versatile and idiosyncratic Russian writers of the twentieth century, known for his complex ornamental narrative style, his fascination with the Russian oral tradition, a deep interest in dreams and the surreal, and his illustrations, which combine elements of calligraphy with folkloric themes. In 1921 he left Russia, eventually settling in Paris, where he spent the rest of his life in poverty and relative obscurity, in spite of his prolific output and reputation as one of the most significant Russian writers of the twentieth century. With an interesting secession-inspired cover illustration and several vignettes throughout by František Horký (1879-1936), a Czech painter and graphic artist who had studied in Munich, Paris, and the Netherlands, and was active in landscape painting and illustrations for fairy tales. As of April 2020, KVK, OCLC only show the copy at the Czech National Library. (Inventory #: P4883)
$225.00 add to cart or Buy Direct from
Bernett Penka Rare Books
Share this item