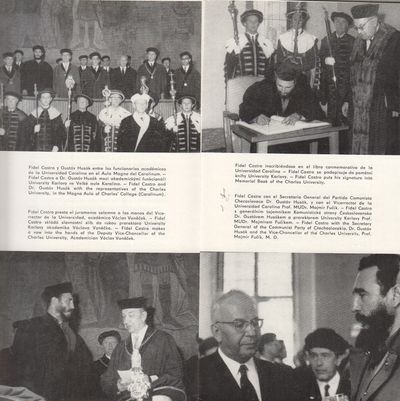 Prague: Universita Karlova, 1973. Octavo (21 × 11 cm). Original gilt-embossed white cloth; violet endpapers; 39, [1] pp. Boards very lightly discolored; else very good. Scarce celebratory volume published on the occasion of Fidel Castro's 1972 visit to Prague, where he was received with great pomp and awarded an honorary doctorate from Charles University. A preface by the University Chancellor attempts - rather unconvincingly - to justify Castro's scholarly achievements and introduces Castro's talk on the occasion, which he calls "an important link in the secular connection of the Prague University with the peoples of Latin America" (29). Castro's speech, which is printed in Spanish, Czech and English, touches on the Czech context of the international class struggle and mentions the politician and writer Julius Fučík, who became a communist martyr after his death at the hands of the Gestapo in 1943. Also reproduced are five photographs showing Castro during the ceremony at Charles University.

One of 820 copies, and scarce: In North America, KVK, OCLC only show the copies at Chicago, Columbia, Harvard, and Yale. (Inventory #: P4391)
$250.00 add to cart or Buy Direct from
Bernett Penka Rare Books
Share this item