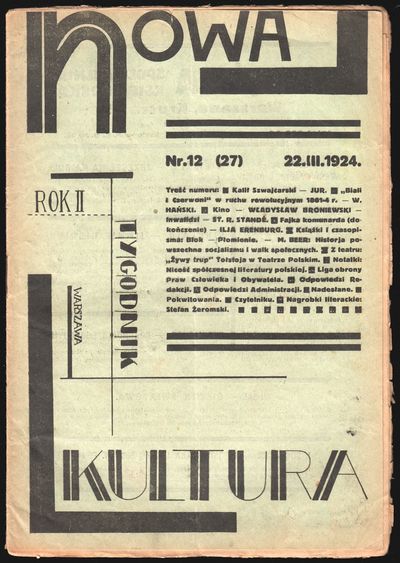 by Kwiatkowska, Franciszka and Edward Staniewski, editors
Warsaw: Franciszka Kwiatkowska, 1924. Octavo (25 × 17.5 cm). Original staple-stitched printed wrappers with cover and typography design by Mieczysław Szczuka; 24 pp. Wrappers very lightly creased; tear to upper edge of two leaves not affecting text; overall very good. Single issue of the important Polish modernist and avant-garde literary and political journal, published from July 1923 to September 1924 by the avant-garde artist Mieczysław Szczuka and communist activists and promoters of the Polish labor movement Jan Hempel and Edward Staniecki. "Nowa kultura" continued "Kultura Robotnicza" ("Proletarian Culture"), an official organ of the Polish Communist Party. Both journals were influenced by the Soviet Proletkult aesthetics and various international left-leaning writers. Mieczysław Szczuka (1898-1927) was a constructivist artist and a co-founder of the avant-garde group and journal "Blok" which, like the contemporary Soviet avant-garde journal LEF, was committed to promoting Productivism, or the close ties between art and production. Szczuka was responsible for the constructivist cover design and minimalist typography throughout the text. The editors, Hempel and Staniecki, were both members of the Polish Socialist Party with strong ties to Moscow and were able to attract many contemporary Polish as well as Soviet writers to the publication. This issue contains a substantial article on American cinema by the Polish futurist writer Władyslaw Broniewski (mentioning David Griffith, Lillian Gish, Chaplin and others), a short story by Soviet writer Ilya Ehrenburg, and an announcement of the publication of the first issue of "Blok" magazine. KVK, OCLC only show the holdings at the Polish National Library and Columbia University. (Inventory #: P004072)
$750.00 add to cart or Buy Direct from
Bernett Penka Rare Books
Share this item