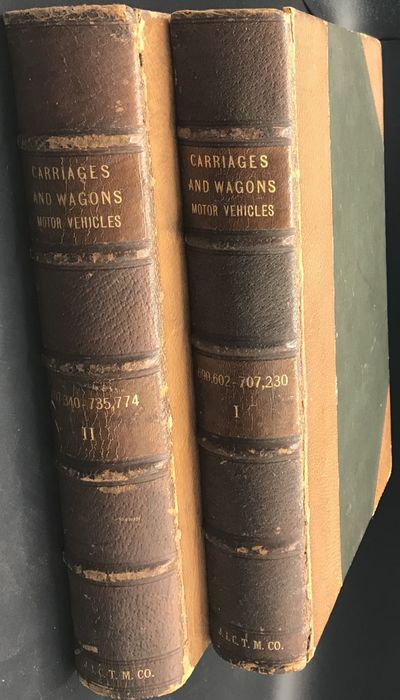 [Washington, DC, 1902. Two volumes. 4to. [unpaginated]. Contemporary 3/4 leather and dark green cloth. Front joints starting, some loss to cloth on rear board of first volume, all edges red, a heavy set. Volume I: 690,602 - 707,230; Volume II: 707,340 - 735,774. Stamped in gilt at the base of each spine: "J.I.C.T.M. Co." Printed text, with illustrations of some 250 patents, each approx. 4 pp., with specifications for inventions related chiefly to automobiles, as well as some for wagons, carriages, and motorcycles.
The owner of this set was the J.I. Case Threshing Machine Company. Formed by Jerome I. Case in Racine, Wisconsin in the 1840s, the company developed and manufactured a steam powered thresher for the expanding agricultural market in the mid-west. According to Gerald Karwowski's article on the company, the first Case "traction" engine won a gold medal at the Centennial Exposition in Philadelphia in 1876. By the early 20th century, the company began to develop gas-powered agricultural equipment.
This collection of patent specifications, evidently put together by the Patent Office and sent to Case, reflects the company's early interest in the burgeoning field of mechanical development. In 1910 the J.I. Case Company purchased the Pierce Motor Company of Racine (no relation to Pierce Arrow), manufacturers of an early line of automobiles. Changing the name to "Case" cars, it manufactured automobiles until the mid-1920s. It utilized the company's numerous dealers and agents world wide to sell the new line.
These patent specifications represent some of the earliest innovations in the development of the automobile. In 1895, George Selden was granted a patent for an "improved road engine powered by a liquid-hydrocarbon engine of the compression type." He used this patent to defend against other innovators in the fledgling automotive industry until 1903, when Henry Ford and a handful of other manufacturers took him to court. Though they initially lost the suit, Ford won on appeal in 1911. As William Greenleaf notes in his book "Monopoly on Wheels: Henry Ford and the Selden automobile Patent," [Detroit: 1961], "The automobile, more clearly than most mechanical creations, illustrates the fact that any notable invention is seldom if ever one man's achievement...." Selden's hold on the light internal combustion engine did not hold, and these early patents for steering mechanisms, frame designs, brakes, traction-engines, air pumps, muffle and mud-guards, etc. became part of the expansion of the fledgling auto industry. (Inventory #: 64710)
$2,500.00 add to cart or Buy Direct from
Bartleby's Books
Share this item