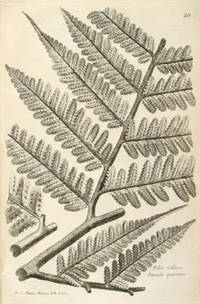 by PLUMIER, Charles
1705. PLUMIER, Charles. Traité des fougères de l'Amérique. [4], xxxvi, 1-93, 98-146, [10] pp. Illustrated with 172 full-page engravings of ferns. Folio, 167 x 106 mm, bound in contemporary limp vellum, title in MS on spine, pair of fore-edge ties. Preserved in beige linen slipcase. Paris: Imprimerie Royale, 1705. First Complete Edition. One of the most beautiful botanical books by one of the era's most important botanical explorers. This publication of Plumier's descriptions and plates of American ferns was compiled by the author the year before his death. In Latin and French. The first half of this volume contains a preface and descriptions to accompany each of the plates, which detail the characteristics of the various species of American ferns depicted. The text is laid out in two parallel columns, with French in Roman and Latin in Italics. The Latin text appeared for the first time in 1703 under the title Filicetum Americanum without illustrations; the present book is the first to contain both the Latin and French text. The first 50 plates originally appeared in 1693 in Plumier's Description des plantes de l'Amerique. The 172 full-page engravings are masterful works of print-making. Plumier's attention to detail allows for precise renderings of the fern's structure and texture. The plants are often printed off-center and/or running off the edge of the page, the bold mise en page gives the viewer a sense that the ferns are sprouting beyond the confines of the book itself. Charles Plumier (1646-1704) was born in Marseilles and entered the religious order of the Minims at sixteen. During his years in the monastery, he concentrated his studies on mathematics, physics, and botany. He was the student of a number of famous botanists, including the Cistercian Paolo Boccone and Joseph Pitton de Tournefort, who brought him on his botanical expeditions. The Dominican botanist Jean-Baptiste Labat accompanied and assisted the author on his voyage to the West Indies. After Plumier's first trip to the French Antilles, he was appointed Botaniste du Roi and was sent to the Americas two other times, by King Louis XIV. He died in 1704, right before he was to commence his fourth voyage publish this title. The fern genus Plumiera was named in his honor by Tournefort and Linnaeus. Plumier's Fougères de l'Amérique was published and printed at the Imprimerie Royale in the Louvre. As demonstrated by this work, France was setting a new standard for book craftsmanship and design in the early eighteenth century. The choice of paper, the mise en page, and especially the typography are of exceptional quality. A number of the fonts created at l'Imprimerie Royale have become classics and are still in use today. Insignificant foxing throughout, regular wear to binding, but overall a lovely copy in a contemporary vellum binding. A very scarce book. Nissen, BBI 1548. Pritzel 7216. Bernard, Histoire de l'Imprimerie Royale du Louvre p. 157. Sabin p. 205-6. Not in Hunt, Stafflau, or the collection or sale catalogue of Arpad Plesch. (Inventory #: 166971)
$18,500.00 add to cart or Buy Direct from
Ursus Rare Books
Share this item
Ursus Rare Books
Offered by

1931
(click for more details about Konstruktsiia arkhitekturnykh i mashinnykh form. (Construction of Architectural Forms and Machines).)

Four Hand-Coloured Copper-plate Etchings from the Conquest of China.

1775
(click for more details about Four Hand-Coloured Copper-plate Etchings from the Conquest of China.)
View all from this seller>