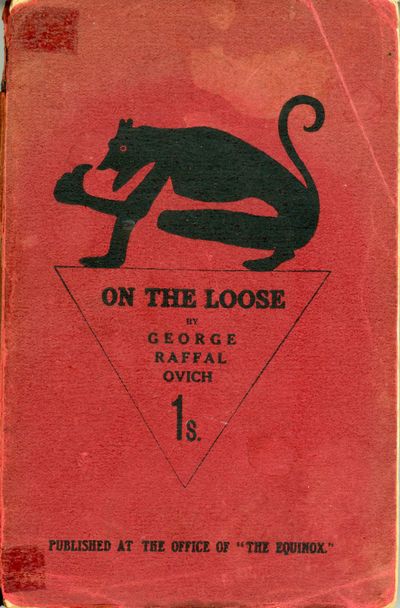 by Raffalovich, George
[London]: Publishing Office o the Equinox, 1910. Small octavo, pp. [1-8] 1-163 [164: printer's imprint] [165-166: ads] [167-168: blank] [note: last leaf is a blank], original pictorial red wrappers printed in black. First edition, later issue. A presentation copy with signed inscription dated 4 May 1910 on preliminary page [5]. This is a re-titled reissue of PLANETARY JOURNEYS AND EARTHLY SKETCHES (1908). "Whimsical fantasies; the first four a series of interplanetary visits, philosophical discussion with alien inhabitants that serve as vehicles for commentary on artistic and social issues of the day. Aliens descended from Empedocles, Greek philosopher who, 'voyaging through air,' reached this distant world, mated with its sole inhabitant and by her kiss became immortal. Hellenophilia pronounced throughout collection." - Robert Knowlton. The author was an occultist associated with Aleister Crowley, who published articles by Raffolovich in his journal, THE EQUINOX, and reissued PLANETARY JOURNEYS AND EARTHLY SKETCHES as ON THE LOOSE. Bleiler, Science-Fiction: The Early Years 1823. Locke, A Spectrum of Fantasy, p. 180. Locke, Voyages in Space (2011) V 556a. Sargent, British and American Utopian Literature, 1516-1985, Additions. Bleiler (1978), p. 163. Reginald 11972. Wrappers worn at edges, several creases, tape marks on front and rear covers near spine folds, a good copy. A scarce issue of this book. (#165930) (Inventory #: 165930)
$150.00 add to cart or Buy Direct from L.W. Currey
Share this item
L.W. Currey Inc.
Offered by