THE NEW PENELOPE AND OTHER STORIES AND POEMS 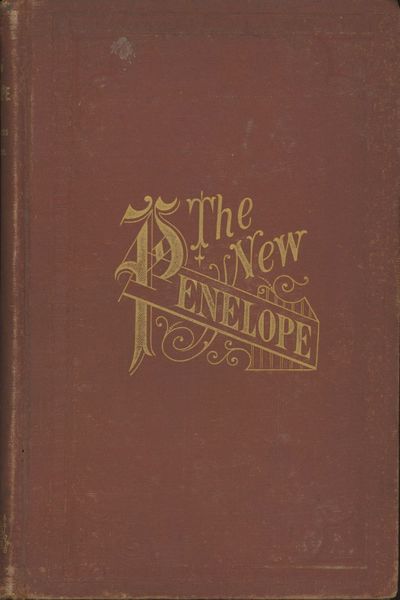 by Victor, Frances Auretta Fuller (Barritt)
San Francisco: A. L. Bancroft & Company, 1877. Octavo, pp. [1-5] 6 [7-9] 10-349 [350: blank], original decorated terra cotta cloth, front and spine panels stamped in gold and blind, rear panel stamped in blind. First edition. The ten stories, most set in California, are "sketches of Pacific Coast life, most of which have appeared, from time to time, in the OVERLAND MONTHLY, and other Western magazines. If they have a merit, it is because they picture scenes and characters having the charm of newness and originality, such as belong to border life" (author's preface). Frances Fuller Victor (1826-1902), was an American historian and historical novelist best known for her books about the West, especially Oregon history, as well as an advocate for women's rights. "When her husband, a naval engineer, was assigned to San Francisco in 1863, Frances Fuller Victor experienced no difficulty in finding literary pursuits in her new home; she was soon writing city editorials for the EVENING HERALD and poems, short stories, and a weekly column for the GOLDEN ERA. Her nom-de-plume on the ERA was Florence Fane, and her column covered a multitude of subjects, from society comments to book reviews. Never slipshod or careless, in her reporting of the news of the week she sometimes reflected the ability at observation which is to be found in a few of her short stories and in most of her historical studies. After two years in San Francisco her husband was transferred to Oregon, and the ERA lost one o its best columnists. Oregon, however, gained a historian. Entranced with the terrain and the people, she set herself the task of telling their story. Her volume on Joe Meek persuaded H. H. Bancroft that he needed her on his staff, and as a result she became an important cog in the remarkable machine that produced the Bancroft histories." - Walker, San Francisco's Literary Frontier, pp. 137-138. Baird and Greenwood, An Annotated Bibliography of California Fiction 2486. Wright (III) 5687. Remnants of two small old private book labels on the front paste-down. Cloth worn at spine ends and corner tips, some rubbing and scuffing to cloth, a very good copy. (#165929) (Inventory #: 165929)
$100.00 add to cart or Buy Direct from L.W. Currey
Share this item
L.W. Currey Inc.
Offered by