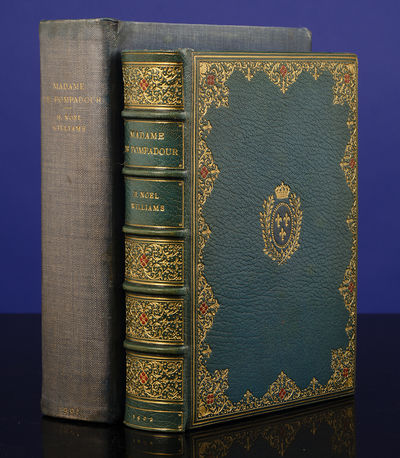 by COSWAY-STYLE JEWELED BINDING; SANGORSKI & SUTCLIFFE, binders; WILLIAMS, H. Noel
London and New York: Harper and Brothers, 1902. Madame de Pompadour - Mistress of Louis XV A Superb Early Cosway-Style Jeweled Binding by Sangorski & Sutcliffe [COSWAY-STYLE JEWELED BINDING]. SANGORSKI & SUTCLIFFE, binders. WILLIAMS, H. Noel. Madame de Pompadour. With sixteen photogravures. London and New York: Harper & Brothers, 1902. Quarto ( 9 3/8 x 7 3/8 inches; 238 x 188 mm.). xiv, 430, [431], [1, blank] pp. Sixteen photogravure plates with lettered tissue-guards. Handsomely bound by Sangorski & Sutcliffe ca. 1912 in full royal blue crushed levant morocco over beveled boards. The inside front cover elaborately decorated in gilt surrounding a fine doublure of rose morocco with the arms of Madame de Pompadour in a geometric design and the letters B.C.H at the lower center. In the center is a recessed and quite magnificent, hand painted circular, gilt framed portrait miniature (2 7/8 inches diameter) on ivory, set under beveled glass, surrounded by a circular gilt design set with four garnets and four pearls. Watered light blue silk endleaf. The inside rear cover has the same elaborately gilt border surrounding a light blue watered silk doublure and matching endleaf. Covers with triple gilt rule borders enclosing an elaborate fleur-de-lys design in gilt with ten onlaid red morocco flowers. In the center of the front cover is an oval dark blue morocco onlay with the arms of Louis XV stamped in gilt. In the center of the rear cover is an oval dark blue morocco onlay with the arms of Madame de Pompadour stamped in gilt. Spine with five raised bands, elaborately decorated and lettered in gilt in compartments, four of which have onlaid red morocco flowers. Double-ruled gilt board edges, all edges gilt. Housed in the original blue velvet lined, blue cloth clamshell case, spine lettered in gilt. Top of front and rear joints expertly and almost invisibly restored. A wonderful early Sangorski & Sutcliffe Cosway-style jeweled binding. The miniature is of exceptional quality and is quite possibly the work of Miss C.B. Currie. Jeanne Antoinette Poisson, Marquise of Pompadour (29 December 1721 - 15 April 1764), commonly known as Madame de Pompadour, was a member of the French court. She was the official chief mistress of Louis XV from 1745 to 1751, and remained influential as court favorite until her death. Pompadour took charge of the king's schedule and was a valued aide and advisor, despite her frail health and many political enemies. She secured titles of nobility for herself and her relatives, and built a network of clients and supporters. She was particularly careful not to alienate the Queen, Marie Leszczy ska. On 8 February 1756, the Marquise de Pompadour was named as the thirteenth lady in waiting to the queen, a position considered the most prestigious at the court, which accorded her with honors. Pompadour was a major patroness of architecture and decorative arts, especially porcelain. She was a patroness of the philosophes of the Enlightenment, including Voltaire.Hostile critics at the time generally tarred her as a malevolent political influence, but historians are more favorable, emphasizing her successes as a patroness of the arts and a champion of French pride. Art historian Melissa Hyde argues that the critiques of Pompadour were driven by fears over the overturning of social and gender hierarchies that Pompadour's power and influence, as a woman who was not born into the aristocracy, represented. (Inventory #: 04816)
$11,500.00 add to cart or Buy Direct from
David Brass Rare Books
Share this item

London: Matthew Iley, 1821
(click for more details about Tour of Doctor Prosody, The... in Search of the Antique and Picturesque, through Scotland, the Hebrides, the Orkney and Shetland Isles;)
View all from this seller>