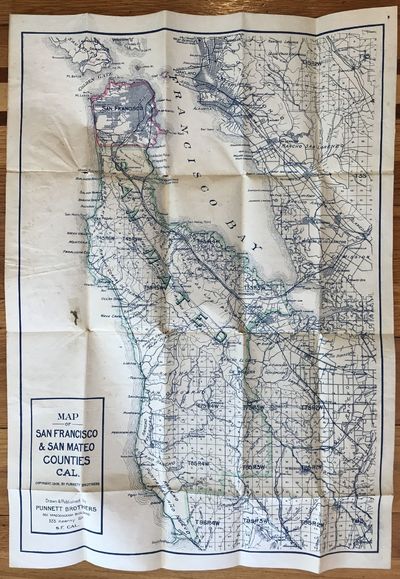 by [California]
San Francisco: Punnett Brothers, 1908. About very good.. Folding map, 28.5 x 20.25 inches. Three short separations along folds; one small area of loss, not in map area. Faint foxing at left edge; light tanning. A rare 1908 map of San Francisco, San Mateo, and the surrounding Bay Area by late 19th- and early 20th-century California cartographers, Punnett Brothers. The upper portion of the map depicts the Bay, with San Francisco and San Mateo County outlined in pink and pale green, respectively. The lower half of the map consists of the southern half of San Mateo County and the area below the bay, much of which makes up today's Silicon Valley. Most of this section of the map, as well as the areas east of Berkeley, Oakland, and San Lorenzo are platted. The map is also marked with significant geographical features, as well as roads and railways, and shows the locations of the many ranchos still extant in the region during this period. An interesting and attractive land map for the Bay Area and the surrounding region during the early 1900s. We locate only one copy, at Berkeley. (Inventory #: 1268)
$875.00 add to cart Available from
McBride Rare Books
Share this item