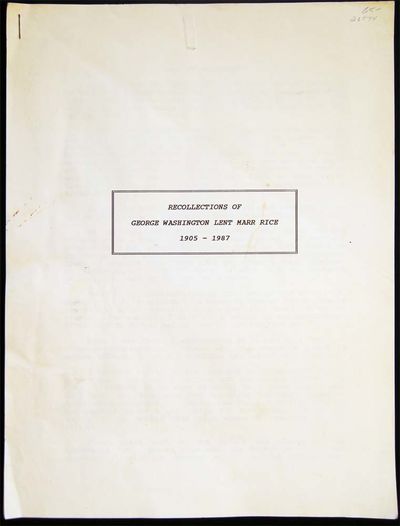 by (Americana - 20th Century - Memoir - Law - Texas)
Houston Texas: Not Published , 1987. 25 pages; typed one side only. Appearing to be a final corrected draft of a group of anecdotes, memories of George Washington Lent Marr Rice Jr. The author recounts his birth & early schooldays in Louisiana & Texas. Rice lived in several locations, as his father was a construction supervisor for school-building projects for Caldwell Bros. At ten years old, the family moved from Jena Louisiana to Beaumont and later Port Arthur Texas; he notes that the schools were closed for several weeks to prevent the spread of the influenza epidemic after the end of WWI. Rice gained a law degree at the U. of Texas and eventually went into practice and became a partner with Butler Binion Rice Cook & Knapp, a large Houston law firm. Essentially a collection of anecdotes, he recounts his first jury trial involving flimflam artists, Standard Oil and land leases. He purchased a farm with frontage on the Trinity River which he unknowingly later sub-let to a member of the "Green Dragon Dope Ring" - the FBI & Secret Service let him know after the fact. Later, he describes the 1940s with Butler Binion which was "...experiencing an unexpected volume of work which had developed from clients which included The Houston Post, Armco Steel Corp. (Sheffield), the Jesse Jones Interests, Brown & Root...McEvoy Company's contracts for the manufacture of machine gun mounts...Defense Plant Corporation's program for the production of molten iron at the Armco Plant with its requirements of coal leases in Oklahoma and iron ore leases in the North and South Basins of East Texas..." The memoir ends abruptly with a group of short snippets about the growth and direction of the law firm. Approx. 8 1/2" x 11" standard white paper sheets, stapled top left corner. Some edge, tips wear and soiling to the cover sheet, old clip-mark at top edge; contents clean and in very good condition.. Typed Draft. Stapled. Very Good. (Inventory #: 26574)
$65.00 add to cart or Buy Direct from Certain Books
Share this item
Certain Books
Offered by

Santo Domingo Past and Present with a Glance at Hayti

London, England : Sampson Low, Marston, Low, & Searle , 1873
(click for more details about Santo Domingo Past and Present with a Glance at Hayti)

St. Ann's Church, (Brooklyn, New York,) from the Year 1784 to the Year 1845, with a Memorial of the Sunday Schools. To Which is Added, An Appendix, Containing a Brief Notice of the Other Episcopal Churches in Brooklyn. By A Sunday School Teacher

Brooklyn, N.Y. : F.G. Fish , 1845
(click for more details about St. Ann's Church, (Brooklyn, New York,) from the Year 1784 to the Year 1845, with a Memorial of the Sunday Schools. To Which is Added, An Appendix, Containing a Brief Notice of the Other Episcopal Churches in Brooklyn. By A Sunday School Teacher)
View all from this seller>