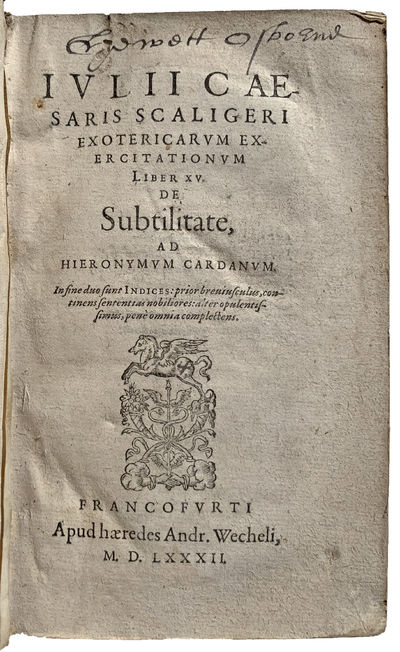 by [CARDAN, Jerome]. SCALIGERO, Giulio Cesare (1484-1558).
Francofurti,: Apud haeredes Andr. Wechelus, 1582., 1582. 8vo. [xvi], 1129 [i.e. 1139], [1], [xcii] pp. Title-page vignette, a few diagrams, figs. in text (map on p. 176), index, printer's device on final leaf; minor waterstaining, and also some minor worming affecting the upper margin of the Epistola and the final four leaves (no loss). Original full dark calf with blind-embossed devices on either board; some worming to spine, bottom head cap loosening, light wear to covers which are generally very good. Signature on title-page of early owner "--- Osborne". THE DUKE OF LEEDS ARMORIAL BOOKPLATE "Pax in Bello" [Peace in War]; additionally signed on title, possibly that of Peregrine Osborne. Very good. RARE. First issued in 1557. "Following its target, the works ranges over the whole of natural philosophy. In astronomy Scaliger ridiculed Cardano's stress on the astrological significance of comets; and he denied that the world's decay is proven because the apse of the sun was thirty-one semidiameters nearer the earth than in Ptolemy's time. Scaliger also rejected several of Cardano's beliefs in natural history: that the swan sings at its death; that gems have occult virtues ("a flea has more virtue than all the gems"); that there exist corporeal spirits that eat; that the bear forms its cub by licking; and that the peacock is ashamed of its ugly legs. Like Cardano, Scaliger was aware that lead and tin gain in weight during calcination, although he preferred to explain the increase as a result of the addition of particles of fire to the metal." (p. 135) "The Exotericarum exercitationum won a celebrity that survived the author's death. Lipsius, Bacon and Leibniz were among its later admirers; and Kepler, who read it as a young man, accepted its Averroist doctrine of attributing the movement of each star to a particular intelligence." DSB XII, pp. 134-136 (by Paul Lawrence Rose). "In 1557 he became the object of the most savage book review in the bitter annals of literary invective. Julius Caesar Scaliger, another vain and articulate natural philosopher of Italian origins, devoted more than nine hundred quarto pages to refuting one of Cardano's books, [On Subtlety] De subtilitate, and promised to return to the subject at still greater length. Though Scaliger died without producing more than a fragment of this promised polemic, his Exercitationes became a standard work in university curriculums – perhaps the only book review ever known to undergo transformation into a textbook. "In his last years, finally, Cardano faced the Inquisition. Having already ceased to teach in the vain hope of propitiating the Inquisitor of Bologna, he found himself first imprisoned, then held under house arrest, and finally condemned, in 1571, to abjure his heretical views." Grafton, Cardano's Cosmos, p 4. PROVENANCE: The Duke of Leeds armorial bookplate, additionally signed on title [Peregrine?] Osborne. ["Osborne was the second son of the Thomas Osborne (later 1st Duke of Leeds) and his wife, Bridget, a daughter of the Montagu Bertie, 2nd Earl of Lindsey. In 1673, his father was created Viscount Osborne in the Peerage of Scotland, but surrendered the title in favour of Peregrine when the former was created Viscount Latimer in the Peerage of England later that year."] [Wikip.]. Adams S-581. (Inventory #: LLV1762)
$1,000.00 add to cart Available from
Jeff Weber Rare Books
Share this item