The ABC of Voting: A Handbook on Government and Politics for the Women of New York State (Presentation copy) 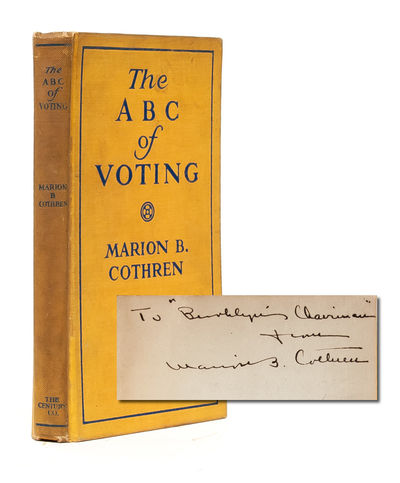 by Cothren, Marion B.
New York: Century Co, 1918. First edition. VG+ to Near Fine. Original publisher's cloth binding with title to spine and front board. Inscribed on the front endpaper with a message for Bertha F. Elder, the chairman of the Woman Suffrage Party of Brooklyn with whom Cothren served as vice chair: "To 'Brooklyn's Chairman' from Marion B. Cothren." A bright, tight, square and pleasing copy, with spine toned and a touch of soiling to the upper front board. Internally unmarked and fresh with the exception of pencil notations to pages 12-15, 57, and 63. Collates xii, 126: complete, including 7 maps and illustrations. Scarce in trade and institutions, the present is the only copy on the market and OCLC reports 16 copies at libraries, none noted as signed. Written by a female member of the New York bar association and with a preface by the Governor of New York, The ABC of Voting was released one year after women gained the right to vote in state and local elections and two years before the 19th Amendment would grant them access to federal elections. "Now that the vote has been given to the women of New York they are charged with the duty of participating in the activities of government, including those of political parties. The intimate relation between government and parties, the influence of political organizations on the character of our national, state, and local government cannot be over stated...To be really a factor in these important matters, a new voter must enroll in the party of her choice, take her place in its organization, do her part at the primaries as well as at the general elections." To that end, Cothren designed a compact and easy-to-follow guidebook for new women voters, as they had unlikely been exposed to such civic information before being enfranchised. Chapters walk the reader through the registration, primary, and general election steps; provide information on the current parties and their platforms; the relationships among local, state, and federal governments and government branches; and new laws that affect women's status. An appendix at the rear provides voting maps and a calendar of election dates for the year ahead. Marion Cothren was well situated to provide this kind of guidance to her fellow citizens. A lawyer specializing in the status of women and children, she was on the National Advisory Council of the National Women's Party, was a chair of the Women's Peace Party from its founding, and was one of thirty American delegates to the International Congress of Women in 1915. The present copy was inscribed and presented to Bertha F. Elder, chairman of the Brooklyn party and an influential suffrage leader in the state. Not in Krichmar. VG+ to Near Fine. (Inventory #: 3450)
$1,850.00 add to cart or Buy Direct from
Whitmore Rare Books
Share this item