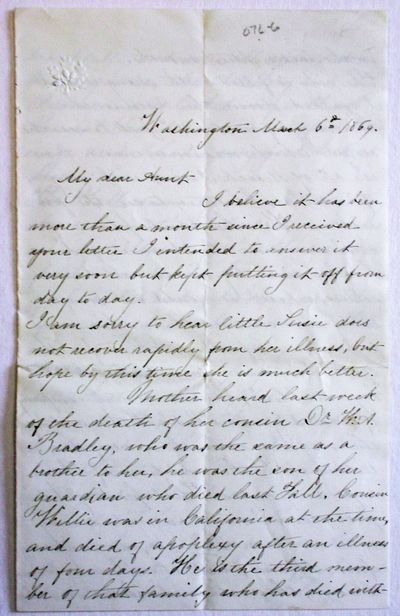 Grace White [c.1844-1903] was the daughter of Ashton Stoodely Hall White [c.1819-1902], a native of New Hampshire. He moved to Washington, D.C. in the early 1840s, serving in the Treasury Department of the U.S. General Land Office for a time, and for many years as Clerk, Secretary, and Chief of the Division of Indian Affairs, U.S. Department of the Interior.
Ms. White writes, "On the 4th of March I went with my friend Mrs. Chestney to see the procession... We could sit comfortably and see everything there was to see. Of course three fourths of the procession were darkies, black 'boys in blue'; there was one company of colored zouaves but all the rest of the negroes wore their every day clothes with the addition of blue caps and capes. That part of the procession I most enjoyed seeing were our own Marines, a company from Albany, and the Pennsylvania Grays, those three divisions marched beautifully and were all splendid looking men, the Artillery and the Firemen also looked very well. General Grant rode in an open carriage and I had a very good look at him."
She says the Inaugural Ball was "a very brilliant affair," although she did not attend because it was Lent. She advises that Ohio Governor Cox is to be Secretary of the Interior. "I hope he will not turn Father out of office. (Inventory #: 36728)
$250.00 add to cart or Buy Direct from
David M. Lesser, Fine Antiquarian
Share this item
David M. Lesser, Fine Antiquarian Books LLC
Offered by