WHEREAS, ANDREW JOHNSON, PRESIDENT OF THE UNITED STATES, DID, ON THE 7TH DAY OF SEPTEMBER, A.D., 1867, ISSUE A PROCLAMATION PROCLAIMING FULL PARDON TO CERTAIN PERSONS ENGAGED IN THE LATE REBELLION, CONDITIONED UPON TAKING AND SUBSCRIBING A CERTAIN OATH THEREIN SET FORTH AND HERETO ATTACHED AND HEREIN INSERTED. . . "I D.D. DARDEN DO SOLEMNLY SWEAR, (OR AFFIRM,) IN PRESENCE OF ALMIGHTY GOD, THAT I WILL HENCEFORTH FAITHFULLY SUPPORT, PROTECT, AND DEFEND THE CONSTITUTION OF THE UNITED STATES, AND THE UNION OF THE STATES THEREUNDER; AND THAT I WILL, IN LIKE MANNER, ABIDE BY AND FAITHFULLY SUPPORT ALL LAWS AND PROCLAMATIONS WHICH HAVE BEEN MADE DURING THE LATE REBELLION, WITH REFERENCE OT THE EMANCIPATION OF SLAVES. SO HELP ME GOD." [signed] DENNIS D. DARDEN/ . . . THIS DAY PERSONALLY APPEARED BEFORE ME, THE UNDERSIGNED, A NOTARY PUBLIC IN AND FOR THE COUNTY AND DISTRICT AFORESAID, THE ABOVE-NAMED D.D. DARDEN AND SUBSCRIBED AND MADE OATH TO THE AFOREGOING. [signed] F.F. KIRBY, N.P., MAY 27, 1868 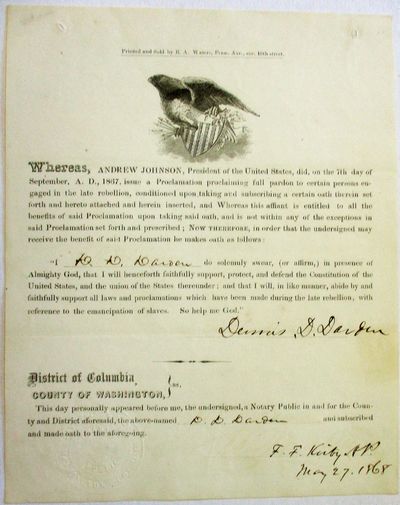 A presidential pardon was required in order for former Confederates to regain their citizenship and voting privileges. The Oath which Darden took in this Proclamation was a precondition to President Johnson's grant of a Pardon to him.
Dennis D[awney] Darden [c.1833-1883], born in Washington D.C., enlisted in October 1863 as a Private in Co. B, Mosby's Cavalry Regiment [Partisan Rangers]. Captured at Upperville, Virginia on 14 October 1864, he was sent to Old Capitol Prison; transferred on 8 February 1865 to Fort Warren, MA; and was one of about sixty Confederate prisoners released on 13 June 1865.
He signed the Oath of Allegiance on the day of his release. John W. Munson, a comrade of Darden's, later credited Darden with helping Munson escape from Old Capitol Prison; Darden stayed behind. Munson's Memoir states that Darden had been "in the secret service department of the government" before the War. Census records show him as a druggist both before and after the War. [Munson: Recollections of a Mosby Guerrilla, 1906.]
In August 1871 Darden was accused of murdering gambling house operator John McCarthy. During a gambling-related altercation, defense witnesses said McCarthy drew a derringer on Darden but that the gun misfired; McCarthy then hit Darden over the head. When officers arrived, Darden was firing a gun at McCarthy, and shot him dead.
The New York Times reported that "the entire gambling fraternity here, who bore bitter animosity to McCarthy, have been very active in Darden's behalf, and he has not lacked for either money or friends." Darden was acquitted; at trial's end a doctor declared Darden insane from McCarthy's beating. He was ordered to an insane asylum. Later he moved to Tennessee with his sisters. The Darden-McCarthy case exposed the police graft system and resulted in the removal of corrupt policemen.
Baltimore Sun, 8/16/1871, p.1 and 1/18/1883, p.4; Washington Post, 8/18/1912, p.9; Evening Star [Washington DC], 10/3/1871, p.4; The New York Times, 10/3/1871, p.8; Munson, J.W.: Recollections of a Mosby Guerilla, 1906.]. (Inventory #: 36564)
$750.00 add to cart or Buy Direct from
David M. Lesser, Fine Antiquarian
Share this item
David M. Lesser, Fine Antiquarian Books LLC
Offered by