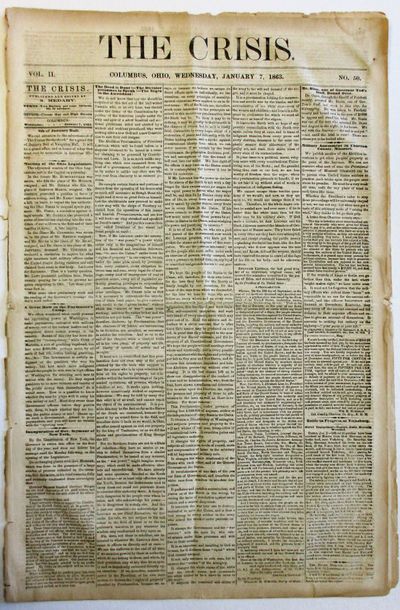 The Crisis, a weekly, began publication on January 31, 1861. Its premise-- that the War resulted from the agitation of abolitionist and Radical Republican extremism-- found sympathy especially in southern Ohio. This January 7 issue expresses Medary's views on the Emancipation Proclamation, which President Lincoln had issued six days earlier. Lincoln is a "half-witted Usurper" who, with his "fanatical and brainless followers," has placed "The Negro in the Ascendant," created a "Dictatorship at Washington," and "commands the white soldier to be a slave in arms to the negro."
Medary began his political career as a Jacksonian Democrat; he supported Stephen A. Douglas for the presidency in 1860. Prominent in Ohio Democratic politics as a newspaper editor and a politician, he consistently opposed the War, abolitionists, and rights for free Blacks. Along with his ally Clement Vallandigham, he was Ohio's most prominent Copperhead.
Medary's bombardments did not go unnoticed by annoyed Ohio soldiers. On the night of March 5, 1863, the 2nd Regiment Ohio Volunteer Cavalry, stationed at Camp Chase in Columbus, led a mob which sacked the office of The Crisis. Medary nevertheless continued as a thorn in Lincoln's side until he died in 1864. (Inventory #: 36659)
$600.00 add to cart or Buy Direct from
David M. Lesser, Fine Antiquarian
Share this item
David M. Lesser, Fine Antiquarian Books LLC
Offered by