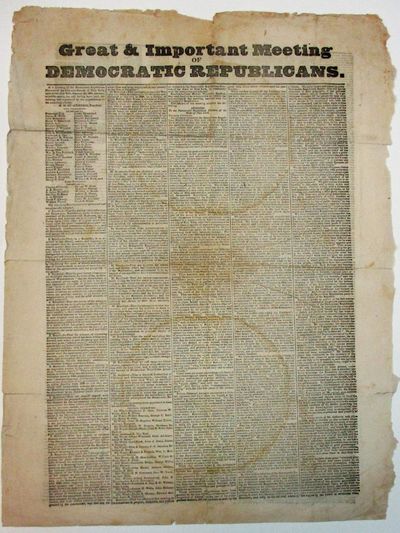 This rare broadsheet was also printed as a 32-page pamphlet. It calls upon true Democrats to "erect the standard of JEFFERSON and MADISON," to "reinstate the principles of '98," and to renounce the radical, Loco-Foco wing of the Democratic Party, especially Robert Dale Owen and Fanny Wright. Twenty resolutions attack the Loco-Focos' plan for "annihilating the 'State Institutions' and destroying the paper currency of the People," and their effort "to bring the business interests under the control of the Federal Government." They seek to "accomplish the ultra federal designs of consolidation," hence an "absolute tyranny."
An Address to the Democratic Republican Electors of the State of New-York assert that Owen and Wright want to transform the U.S. by Revolution into a radical, communist society. The Address is signed in type by M.M. Quackenbos as President, and more than sixty Vice Presidents and Secretaries.
FIRST EDITION. Not located as a broadsheet in any normally consulted source. For the pamphlet, see AI 51905 [5 locations] and Sabin 28428. (Inventory #: 36595)
$850.00 add to cart or Buy Direct from
David M. Lesser, Fine Antiquarian
Share this item
David M. Lesser, Fine Antiquarian Books LLC
Offered by