TO THE ELECTORS OF THE STATE OF NEW-YORK. FELLOW-CITIZENS! 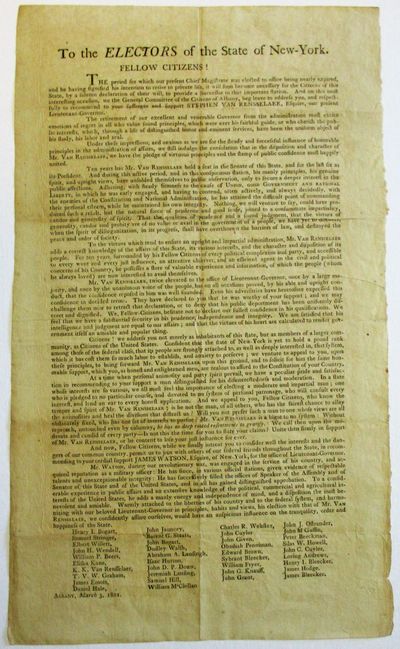 The broadside is signed in type by nearly forty worthy Federalists who urge the election of Lieutenant-Governor Stephen Van Rensselaer to replace John Jay, who had become New York's second Governor after resigning as the first Chief Justice of the United States. Van R is praised for his private and public character, his integrity and patriotism. "At a time when personal animosity and party spirit prevail, we have a peculiar pride and satisfaction in recommending to your support a man distinguished for his disinterestedness and moderation."
Our research does not disclose any other copies of this unusual imprint.
Not in American Imprints, Sabin, Eberstadt, or on OCLC or the online sites of AAS, NYPL, NYHS, Harvard, Yale as of April 2020. (Inventory #: 36676)
$1,250.00 add to cart or Buy Direct from
David M. Lesser, Fine Antiquarian
Share this item
David M. Lesser, Fine Antiquarian Books LLC
Offered by